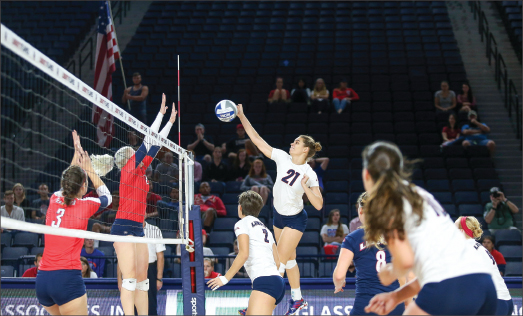 “It is always great to come out and start conference play really strong,” redshirt junior outside hitter Caroline Douglas said. “We have a very strong conference this year, and a lot of teams can do a lot of things. So every single win counts.”

The Lady Flames victory over the Highlanders was Head Coach Shane Pinder’s 198th victory, putting him in a tie for the most wins in program history. He now shares the spot with Chris Phillips (1992-97, ’99-’03).

The last matchup between the Lady Flames and the Highlanders was in the Big South Conference semifinal and resulted in a Lady Flames loss. Junior setter Caila Stapleton said last year’s loss provided plenty of motivation for the Lady Flames this season.

“We definitely had a little chip on our shoulder from last year,” Stapleton said. “It was the toughest loss I’ve ever been in, in the semifinals.”

Friday night, the Lady Flames began strong, winning the first set, 25-21. The Lady Flames never gave up the lead after starting off the set with a 5-1 advantage. The Highlanders were held to a hitting percentage of .050.

The Highlanders responded to the early deficit as Pinder predicted, winning the second set, 25-23. But the Lady Flames made defensive changes to combat the Highlanders offensive attack and took the third set, 26-24.

“In the second set, I knew (the Highlanders) were going to pick it up,” Pinder said. “We went in the locker room and made some defensive adjustments in terms of positioning and served a little bit tougher and gave us some more opportunities to win the third set.”

Pinder pointed to Douglas’ leadership and offensive production as keys for Friday’s game and the season thus far.

“She is anchoring our toughness,” Pinder said. “She is making good decisions. She is scoring the balls when we need them to get the pressure off us.”

Riding a four-game winning streak and with the first Big South Conference victory under their belt, the Lady Flames believe their best play is yet to come.

“I think there is a lot more out there for us,” Stapleton, who recorded a career-high 25 digs Friday, said. “They didn’t even see the best we have. I’m excited to just stay focused on the next match.”

The Lady Flames will return to Big South action when they take on Gardner-Webb Oct. 3 at 7 p.m. in Boiling Springs, North Carolina.

RODRIGUEZ is a sports reporter.