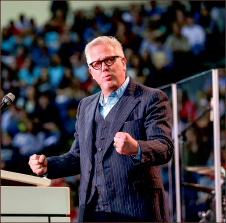 Liberty University students are normally greeted at Convocation by things like the sound of worship music or the aroma of the occasional student bake sale to fund a mission trip.

Instead, each student who attended the final Convocation of the semester Friday, April 25 in anticipation of hearing popular media personality Glenn Beck was greeted with a free $20 bill. Although Beck was the main speaker for the morning’s event, businessman Bo Pilgrim, founder of Pilgrim’s, the second-largest chicken producer in the world, was also in attendance to present Liberty President Jerry Falwell with the American Bible Society’s (ABS) 2014 Pilgrim Award for Workplace Evangelism, named for Pilgrim. Pilgrim and ABS Vice President Charlie Krueger also announced that ABS would be donating $10,000 to Liberty.

The award was not the only thing Pilgrim gave out on Friday. Pilgrim also brought enough copies of a small book containing passages from the Bible that detail the gospel message, called “Good News for Modern Man,” for every student in attendance. Inside the back cover of each copy of the book was $20. These books were distributed to every student in attendance, totaling more than $200,000.

Beck later announced that Mercury One, an organization he founded, would also be donating $50,000 to the university.

“He spoke here for our Commencement in 2010, … (and) at that time I told the crowd at Commencement, ‘Glenn Beck has risen to influence American culture at a pivotal time in our history. His message has engaged millions of Americans in a struggle to preserve their nation’s founding ideals…’ That is even more true today than it was four years ago.”

Falwell also shared some of Beck’s accomplishments, which has helped him rise to national prominence.

“While Beck’s television show sets record ratings, his books reach the top of bestselling lists and his speaking tours play to sold-out audiences, Beck is best known for his message more than his medium,” Falwell said.

Beck then took the stage and spoke to students about the importance of faith in a country founded on freedom.

“The times are changing, and if we are going to rebuild our nation and keep people free, then we have to look at the source,” Beck said. “You can’t say, ‘I want to be a French chef’ and know nothing about how to make a sauce. You have to know what the blueprint is. And the blueprint for freedom, the blueprint of the Western world, is the scripture.”

Beck encouraged students to find God’s purpose for their lives. He also noted that, like everything else in life, the students in attendance are attending Liberty for a reason.

“(God) brought us all here for a reason,” Beck said. “… Are you actively searching for your reason? Because you’re here for a reason. … I hope that every single person hears the message that you were born at this time in this country. You are at this university for a reason.”