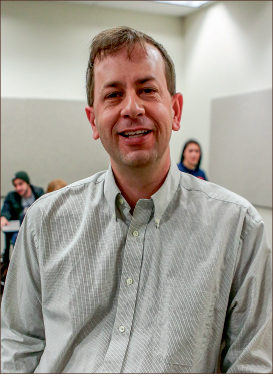 As 9-year-old Matt Gage dove into the pool in a small Iowa town, merely trying to escape the sweltering, 100-degree heat, he had no idea how much his life would change.

After surfacing, Gage said he propelled himself forward with his right arm, but his left would not follow. He quickly realized he was unable to move the entire left side of his body. Within seconds, Gage’s cousin, who had accompanied Gage to the pool, pulled him out of the water and prevented him from drowning. But Gage’s battle was just beginning.

Gage lost consciousness shortly after being pulled from the water, and he was immediately taken to a nearby hospital. According to Gage, the doctor told his parents he was suffering from a heat stroke, but the emergency medical technician who first treated him offered the theory that Gage had suffered a stroke.

Later that day, Gage was transferred to the Mayo Clinic in Minnesota and was immediately taken into emergency surgery after it was revealed that he had, in fact, suffered a stroke. The neurosurgeon told Gage’s parents there was a good chance Gage would not wake up, and that if he did wake up, he would be a vegetable for the rest of his life.

Despite huge odds, Gage did wake up. But the neurosurgeon told him he still would not be able to move his left arm or leg.

According to Gage, as a child, he dreamed of being the next Michael Jordan. When his dream was taken away, he felt defeated.

In the days following the surgery, Gage’s father urged him to try moving his leg, but he quickly answered with “I can’t.” The conversation that ensued became a turning point for Gage.

“My dad … said, ‘Matt, what did “can’t” ever do for you? … If you say you can’t do it, you’re not gonna do it. If you don’t start believing in yourself and believing something can happen, that you can get better, then you’re gonna be in a wheelchair,’” Gage said. “… That day was the day that I decided I’m not going to let this stroke define me. I’m going to use this stroke to help me help others.”

Contrary to the surgeon’s opinion, two weeks after his surgery, he lifted his left leg. Only a couple days later, he was able to move his left arm as well, according to Gage. With the help of a brace, Gage was walking before he left the hospital. Additionally, despite having somewhat limited range of motion in his left side, Gage continued playing basketball through junior high and high school. Since then, he has remained active by running a 5k and even learned to ski.

“A lot of times, people look at me and think, ‘Oh, this guy’s handicapped.’ I don’t see that,” Gage said. “I feel that God has allowed me to do the things that I still wanted to do. They’re just in a different format.”

Today, Gage said he tries to use his experience to help others — a goal he hopes to accomplish through his work in athletic training. Gage, who has bachelor’s, master’s and doctorate degrees in athletic training areas, has previously worked as a professor and athletic trainer for the University of Northern Iowa, Brigham Young University and Indiana State University.

“When I have students in my class, I view them as future professionals,” Gage said. “And my hope is that I can help prepare them for what they desire to do. … The way I look at it, the exciting thing about being here is if we can produce around 20 successful athletic training students every year, in five years, we can have 100 more Christian athletic trainers in our profession, and I firmly believe that that will make an impact down the road.”

In addition to his professional work in athletic training, Gage said he believes God has enabled him to encourage others as well.

“I feel that God has used this stroke in many ways for me not only to hopefully impact others for him, but hopefully to give some of those people hope too,” he said.

Gage said recently, he encountered a boy who also suffered a stroke and was feeling discouraged about what he would do in the future. According to Gage, he was able to offer encouragement by sending a video of him taping an injury one-handed. Through the video, Gage said he showed the boy that it is possible to do things that may seem impossible after suffering a stroke.

The professor also told the story of an elementary school boy who suffered a stroke. Gage said that when the boy’s mother had seen Gage and the fact that he has a wife, kids and a successful career, she was immediately encouraged that her son could recover and still have a good life.

Gage said that although the stroke presented several challenges, God has used it for good. According to Gage, if he had to go back to the edge of that pool in Iowa, he would still jump in and face the moment that would forever change his life.

“Now, today, I would tell you that I wouldn’t want it any different.”