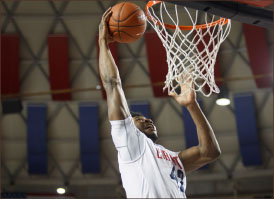 “Don’t lose sight of where you come from,” Sommy Ogukwe, a redshirt junior on Liberty’s men’s basketball team, said.

Ogukwe, born in Abuja, Nigeria, had the privilege of coming to the U.S., using basketball as his means to get here. “Most of us athletes that come from Nigeria do not come from wealthy homes,” Ogukwe said. “Basketball is a medium to come to the United States.”

Unlike most American children, Ogukwe did not have the opportunity to play basketball at an early age.

“I started when I was pretty much grown and gained height,” Ogukwe said. I picked up the game late and have been playing catch up to the guys who were blessed to play early.”

Regardless of not being able to play as a child, Ogukwe ended up playing Division I basketball with only a few years of experience under his belt.

“When I came to college, I was blown away to say the least,” Ogukwe said. “It took a lot of devotion, in terms of extra work, to catch up.”

During his freshman year, he appeared in 30 games.

“My freshman year, I still hold it today as my best year at Liberty,” Ogukwe said. “I had a balance in a sense, where basketball was great, academics was great, and had great hallmates.”

Ogukwe relished the moments of his freshman year at Liberty, as he told a story about his roommates chanting his name at one game in which he played well.

“There was this crazy game once, and they were there screaming, ‘Sommy! Sommy! Sommy!’” Ogukwe said. “Every time I sit back and think about it, it still brings me a lot of joy.”

Despite the progress he made in his freshman year, Ogukwe hit a setback when he suffered a knee injury his sophomore season, which resulted in him missing the entire season and ultimately affected his overall progress as a basketball player.

“Even today in my low moments, I ask God why the injury (happened),” Ogukwe said. “I still don’t know the benefits of the injury. Did it set me back? Yes, it did. I am still playing catch up. Not to use that as an excuse. It is what it is.”

Despite Ogukwe’s lofty expectations, his injury has not set back his positive attitude.

“Sometimes when I think, ‘God why me, why me?’” Ogukwe said. “(But) you have to sit back and look at millions of other people going through worse conditions. Instead of counting your failures or mishaps, count your blessings.”

One of those blessings, Ogukwe said, is being thankful for having access to things he never had in Africa, and he hopes to never lose sight of that.

After college, Ogukwe hopes to pursue a basketball career in Europe if his numbers are competitive. If not, Ogukwe will not hold on to disappointment but will keep pursing his dream of being successful.