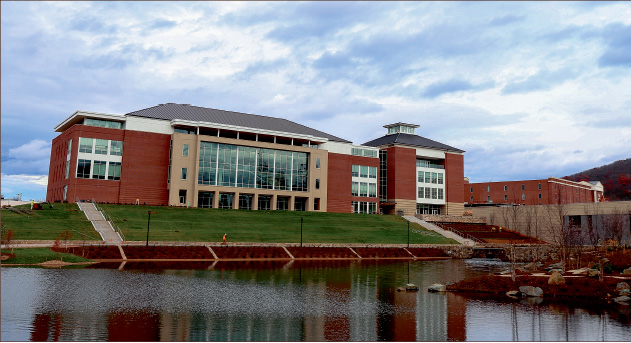 Over the past few months, Liberty University’s campus has been undergoing numerous changes as various construction projects have been launched.

The most advanced project is the construction of the Jerry Falwell Library, which will expand the library resources while also providing several food options for students. According to Charles Spence, director of Planning and Construction at Liberty, the library will be ready to open for the upcoming spring semester mid-January. “We received our Certificate of Occupancy (CO) for the library … which means it’s on schedule,” Spence said. “That’s when we expected to get it, around this time in November.”

Spence said workers are currently in the process of installing food service venues, computer related items, furniture and flooring as they complete the finishing touches on the new facility.

According to Spence, another project on schedule is the construction of Liberty’s new medical school, which has cost $25 million to build. The school will feature new labs, classrooms, offices, simulation rooms and recording equipment.

“It’s coming down to the end of construction,” Spence said. “We still have about three months. Completion date for the CO is in the middle of March.”

Although the construction of the new dormitories is moving slower than anticipated, Spence said they are going full blast under construction. “It is a few weeks behind on its schedule,” Spence said. “We’re fighting to stay on schedule. The dorm has to be ready to move in and be lived in by the first of August, so we’re pushing really hard.”

According to Spence, one of the primary difficulties the construction brings is the inconvenience it creates for some Liberty students.

“I think the thing we struggle with the most is not the building, it’s to try to make sure (the construction) doesn’t impact the students in a negative way,” Spence said. “We have to keep the students positive during this whole construction phase, even though they are constantly being moved around.”

One current obstacle is the removal of parking spaces near the Reber-Thomas Dining Hall in order to prepare for the construction of a new parking garage, according to Spence. As with all of the campus construction, Spence said the lasting benefits will outweigh the temporary difficulties. “We had to take a couple hundred spaces away to do the construction, but when we get done, there will be 1,400 spaces available,” Spence said. “Everybody wants to park right at the door, and this parking garage will get you a lot closer to the door.”

Alan Askew, construction coordinator for Liberty, said another challenge in the construction of the various buildings is the fact that they are all so unique.

“We have a state of the art library, a baseball stadium, a parking garage and a medical school,” Askew said. “Each one is an individual project that requires its own attention and research and construction. It makes it challenging, but it also makes it exciting, too.”

According to Dr. Todd Campo, the vice president of Student Leadership, the vast majority of student feedback to the construction has been very positive.

“Those new residences are just going to be phenomenal,” Campo, said. “(It is a) perfect location. The driving problem won’t be as large. Everything is going to be right there.”

Campo noted that the largest concern of some students is that they will not be at the school long enough to see the changes to the campus. “I think a lot of people’s immediate concern is that they are not going to see a lot of (the changes),” Campo said. “I think if you build that community, which is what we try to do, there’s a sense that you are going to make this better for the future students, that you are actually being part of a legacy.”

According to Campo, unlike schools that are trying to save money during this economic slump, Liberty is prospering and building up its campus.

“This past year, it’s just been incredible,” Campo said. “So many schools are seeking to cut back and cut corners. It’s just been the opposite here.”