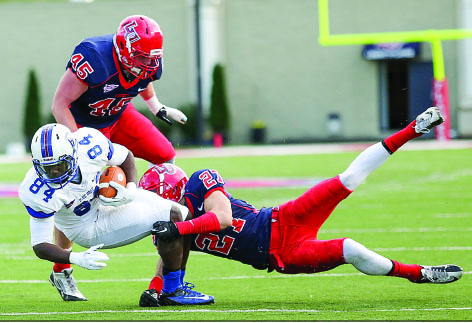 Running back Desmond Rice led the Flames with 96 yards and three touchdowns. Rice also became the ninth running back in school history to earn 10 or more touchdowns in a season.

“It was huge getting the running game going early,” Rice said. “We wanted to pound the rock the whole game, and it helped us keep their offense off the field.”

The Flames defense forced two turnovers and only allowed the Blue Hose to earn 244 yards of total offense. Liberty also held its third straight opponent to less than 100 yards on the ground.

“We are always shooting for that shutout,” linebacker Scott Hyland said. “But we gave up 14, and we got the win, so we need to get ready for next week and prepare for Brevard and see what we can do there.”

Liberty’s first drive set the tone, letting the run open up the pass. Quarterback Josh Woodrum completed all three of his passes to different receivers and ended the 7-play, 65-yard drive with a 20-yard touchdown pass to wide receiver Darrin Peterson, who beat his man on a double move.

With the Blue Hose in the red zone with 5:32 to go in the first quarter, safety Jacob Hagen forced fullback Blake Roberts to fumble the ball, and Hyland recovered the ball at the 10-yard line.

With 90 yards of field in front of them, the Liberty offense slowly decimated Presbyterian’s defense. The Flames moved backward at the beginning of the drive with a false start penalty and a two-yard loss on the ground. However, running back D.J. Abnar got the Flames out of a tough third-and-14, catching a 17-yard pass from Woodrum. A few plays later, Peterson took a broken reverse pass and scramble for a 27-yard gain that put Liberty in Presbyterian territory.

At the start of the second quarter, the Flames still had possession and continued to methodically march down the field. Rice ended the drive with a one-yard touchdown run on an 18-play drive that took 9:21 off the clock.

“It put a smile on my face,” Head Coach Turner Gill said. “It’s a great feeling for me. To see an 18-play drive and our guys be consistent and then put points up on the board, it’s a fantastic drive. It demoralizes a team when you’re able to take an 18-19-play drive 90 yards to make it happen.”

On the ensuing possession, Presbyterian was able to put the ball in the end zone when quarterback Heys McMath completed a nine-yard pass to tight end Joey Gilkey to cut the Liberty lead to 14-7.

The Flames regained possession and saw an old face emerge in the backfield. After missing the first nine games of the season due to suspension and injury, running back Aldreakis Allen saw his first action of the year. He ended the game with three carries for 22 yards.

“We are going to use all those guys,” Gill said. “(Allen) still has to get into game shape. He has only practiced five to seven times. We just gotta keep monitoring him to see if he is ready. I feel good about all of our backs, and we need all of them as we continue to move forward.”

After a Liberty missed field goal with 35 seconds left until halftime, McMath threw an errant pass that was intercepted by Hagen, who returned the turnover and moved the Flames into Blue Hose territory.

With 18 seconds to go on third down, Woodrum completed a pass to tight end Dexter Herman for 11 yards, which set up a 14-yard touchdown run for Rice and pushed Liberty’s lead to 14 heading into halftime.

“It was actually supposed to be a passing play,” Rice said. “They must have seen something upstairs and checked it into a run. They really didn’t have anybody outside, and it was pretty wide open.”

Presbyterian started off with the ball in a third quarter that ended with a four-yard scamper into the end zone by McMath. On the next possession, Liberty went three and out.

Late in the third quarter with Presbyterian down seven, the Blue Hose decided to fake a punt on fourth down, but they were snuffed out by defensive lineman JaRon Greene.

“We have a guy to check for a fake in any situation,” Gill said. “This time, we called for a punt safe, where there are six to seven people checking for whether it is a pass or run.”

After the stop on fourth down, the Flames regained the ball at the Blue Hose 28-yard line. With 1:20 left in the third quarter, Rice ended the drive with a six-yard touchdown.

At the start of the fourth quarter, Liberty looked for the knockout blow. Woodrum threw a 45-yard pass to wide receiver Dante Shells, who caught it at the nine-yard line. Two plays later, Abnar punched it in from four yards out, giving the Flames a 21-point lead.

“It’s something (that) this staff has harped upon, and it’s finish, finish, finish,” Hyland said. “What Coach Gill has done the past couple games is bring us out in the fourth quarter and refocus our minds.”

Hagen led the Flames with nine tackles to go along with his forced fumble and interception.

Big South Update
The No. 3 Coastal Carolina Chanticleers lost their first game of the season to the No. 16 Charleston Southern Buccaneers 31-26 Nov. 9. Liberty plays the Buccaneers Nov. 23 at 11 a.m. With a win, the Flames will earn a three-way tie for the Big South Championship.