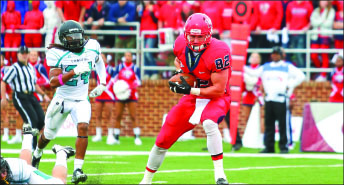 A complete game is what the Liberty Flames (4-4, 1-1 Big South) strived for after a homecoming loss, and pitching a shutout on the road against the Gardner-Webb Runnin’ Bulldogs (4-4, 0-2 Big South) was exactly that.

Last season, Gardner-Webb’s redshirt junior quarterback Lucas Beatty threw for 383 yards. But the Flames held Beatty to 200 passing yards and sacked him a season-high six times in a 24-0 victory. “We have great leadership on our team,” Head Coach Turner Gill said to Liberty Flames Sports Network (LFSN). “Our coaches do a great job giving our guys the opportunity to show what our team is all about. Our character was revealed after these last two ballgames.”

This is the first time Gardner-Webb was shut out two games in a season since 1985.

“We were relentless,” defensive lineman Jibrelle Fewell said to LFSN. “We all worked together today, and it showed.”

Gardner-Webb was unable to move the ball during the game, gaining only 230 yards of total offense. They went 3-16 on third-down conversions.

Defensive lineman Toby Onyechi led Liberty with 1.5 sacks. Fewell, along with linemen Cory Freeman and Erwin Dessources, also planted Beatty to the ground, recording one sack each.
After allowing 235 yards on the ground to Coastal Carolina, the Flames gave up 30 yards on 29 rushes to the Runnin’ Bulldogs.

After a scoreless first quarter, quarterback Josh Woodrum and the Flames offense began to march down the field at the beginning of the second quarter. With 10:08 remaining before halftime, Woodrum capped off a seven-play, 55-yard drive on a three-yard option keeper.

Liberty regained possession after a Gardner-Webb three-and-out. Known for running through the tackles, running back Desmond Rice showed off his arm and delivered a 33-yard touchdown pass to wide receiver Darrin Peterson.

“We hit a crossroads,” tight end Brandon Apon said to LFSN. “For us seniors, this is it … (and) at halftime, Gill gave the seniors the floor, and we said that we haven’t finished well over the last couple of games, and if we want this season to mean anything, we had to finish the game against Gardner-Webb.”

The Flames defense continued to overwhelm Gardner-Webb’s offense after halftime, only allowing one first down in the third quarter. Midway through the third quarter, Liberty started from its own 16-yard line. Woodrum went 5-7 for 60 yards on the 11-play, 75-yard drive that took 6:56 off the clock. The drive ended with Woodrum connecting with Apon for a nine-yard touchdown pass.