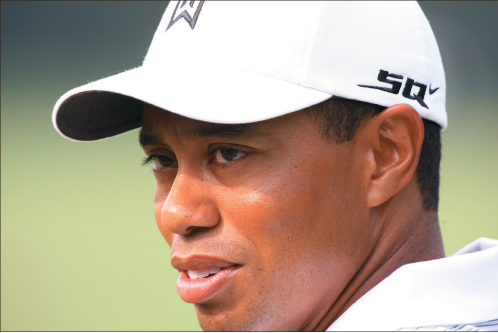 Just when you thought that the glaring spotlight would finally swing away from Tiger Woods, the man whose name has become synonymous with scandal jumps right back onto the center stage of public attention.

But not to worry, the current headlines no longer read of infidelity, deception and catastrophe. On a much happier note, Woods has once more been crowned reigning champion and golf hero. Why the sudden change of heart? Well, because he is winning again, of course.

Nike’s most recent advertisement prominently declared in bold font, “Winning Takes Care of Everything.” The slogan was unveiled after Woods’ major victory at the Arnold Palmer Invitational, which re-secured his ranking as the No. 1 golfer in the world.

Talk about faulty logic. Sorry, Tiger, but winning does not, in fact, “take care of everything.”

“When asked about his goals, such as getting back to No. 1, he has said consistently (that) winning is the way to get there. The statement references that sentiment and is a salute to his athletic performance,” Gast said.

Though the words themselves may be nothing new, they hold an entirely different connotation given the recent context of Woods’ very public, very messy personal life — a fact I believe Nike not only knew, but monopolized upon.

In a way, the marketing of Nike’s advertisement is a brilliant and strategic ploy. After all, controversy sells. The more people talk about and discuss the new ad, the more Nike stands to profit. For better or for worse, Nike’s name is getting out.

How completely and shockingly tragic. Since when does success excuse moral and human indecency? I would like to ask Tiger Woods how winning fixes his broken marriage, how it solves the fact that two children are left as products of a fragmented, fatherless home.

But winning takes care of everything. The cost of children, a marriage, a family — none of it is too high of a price to pay. All sins are redeemable, just so long as Woods manages to hit that little white ball into a hole 350 yards away, right? Winning will take care of the rest.

The notion is ridiculous.

I may not be a professional athlete, and I may not understand the societal pressures placed upon athletes to perform, but what I do understand is a terrible message when I see one.

Granted, sports do have an incredible way of raising spirits and developing community. There is a heartfelt passion and camaraderie in cheering on a local team or favorite athlete. But the moment that athletes are elevated to pedestals and society defines winning as the ultimate means to forgiveness, athletics has gone too far.

I am not saying that Tiger Woods should never be forgiven. I am certainly not saying that the media should continue to bring up his personal life every time the man plays golf. However, if he is admired as an athlete, admire his athletic ability. Do not mention personal sins only as an attempt to cover them up with professional accomplishments. And please, do not sell the lie that winning is the ultimate form of pardon, capable of righting all wrongs.

One victory has not suddenly made Woods any better of a person, and donning a green jacket at the upcoming Masters Tournament will not erase his past sins.

Winning will never be able to take care of the fact that a day will come when even the great Tiger Woods will no longer be able find his identity in the game of golf. Something tells me that on that day, Woods will be less concerned with his achievements and more concerned with the heartaches and pain left in the wake of his selfishness.

What will take care of everything then, Tiger?