Students in love with ‘LU Crushes’ 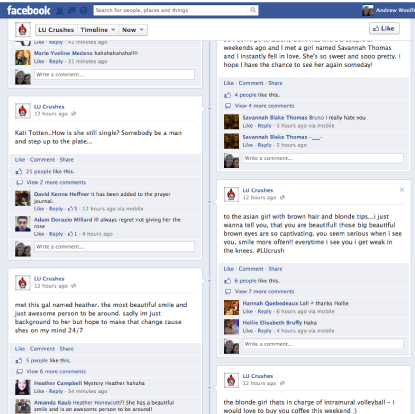 Yet is anonymously posting your fondness for a fellow student on a Web page really the best way to handle the situation? Digital dating? — While the effectiveness of the site’s system on flirting is unproven, the allure of scrolling down the post on Facebook is undeniable. Facebook screenshot

For many of us, elementary school marked a time of loud recesses, hushed classes and whispered note passing. Love letters would be scribbled on messy lined paper, crumpled up and sent flying into the lap of fifth-grade crushes.

Now in college, we have grown up and utilized the ever-increasing powers of technology to seek out our crushes.

On a Facebook page called “LU Crushes,” students can privately message a love note that will be posted on the page’s wall for the rest of Liberty University to guess your crush’s identity.

The page was created in early February and has gained more than 2,800 likes on Facebook.

“I would say that this page is mostly for entertainment,” the page’s creator, who wished to remain anonymous, said. “It seemed like something fun and entertaining that Liberty students would possibly take part in, and thankfully they did.”

Although Liberty students are participating, many contributors are following the creator’s lead and leaving their posts anonymous.

“There’s this guy that sits near me in Convocation,” one anonymous post said. “I have heard his friends refer to him as ‘Squeeler.’ I actually followed him back to where he lives. Does anyone know what his real name may be? I would love to get to know him better.”

Comments under this post ranged from calling the crushing student “creeper” to a “lost puppy.”

Instead of following our crushes home and then standing dejected outside their slamming doors, how about displaying a little boldness? Do we not know that God will direct our futures, including our future relationships?

“Liberty students, how are we going to be champions for Christ when we can’t even face God’s children face to face?” Liberty student Chris Moore said in a post on the site. “The worst thing that might happen is they aren’t interested. Not the end of the world.”

Many students commented on the page’s anonymous posts, telling their fellow classmates to ask their crush out on a date, or at the very least to contact them in some way.

Joshua 1:9 says, “Have I not commanded you? Be strong and courageous. Do not be afraid; do not be discouraged, for the Lord your God will be with you wherever you go.”

Oftentimes, after the alleged crush is tagged in a post, the person mentioned will comment, telling the anonymous admirer to approach them the next time the two are near.

“They could be thinking the same way about you, but because neither of you are willing to take the risk of saying hello or casually talking about going out for a meal, you’ll never know,” Liberty sophomore Chadwick Moore said in a post on the page.

As Liberty students, we pray that God will bless our upcoming tests, lengthy papers and gutsy sprints across University Boulevard, and yet, when it comes to relationships, we cower behind technology. Texting and private messaging over websites seem to have replaced face-to-face interactions.

“I am hoping this page will help people get rid of their fears and actually approach the people that they are crushing on,” the page’s creator said. “We are constantly coming up with ideas, and we are hoping that in the near future, we will be able to find a way for admirers to actually get the chance to meet and maybe even take out their crushes.”

The process of meeting and speaking to your crush has been over-complicated by the “LU Crushes” page. After all, the entire campus is required to go to Convocation three times a week. Chances are the object of your affection is there with an empty seat close by.

The difference between fifth grade and college is that in fifth grade, we would sign our name at the bottom of our love notes and stare down our crush until they made their decision. Now, we push our computers’ “send” buttons with baited breath, never revealing our true identities. Actions speak louder than words, so in agreement with my fellow students’ posts, “Go for it.”