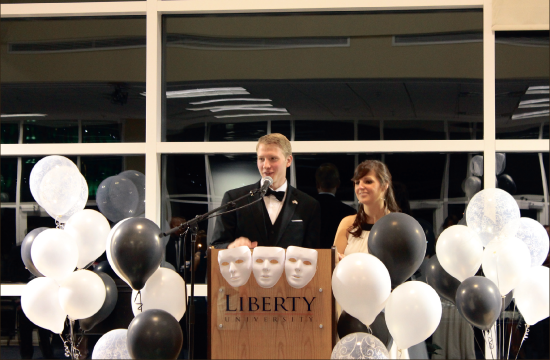 The Liberty University Jazz Ensemble set the mood as students arrived in their classiest suits and dresses for “A Black and White Affair” on the third floor of the Williams Stadium, April 6.

The Liberty Student Government Association (SGA) hosted the event, also known as the Junior and Senior Gala, but having fun and getting dressed up was not the only purpose of the party. According to Chelsea Patterson, Liberty’s senior class president, the approximately 250 tickets sold will help fund this year’s senior class gift.

The event also served as a kickoff for Pro-Life Emphasis Week, which will include speakers, lectures and discussions about pro-life issues, Patterson said. Although the details of the senior gift are still in the works, Patterson said that SGA hopes to give a percentage of the money to a mother who chose life for her unborn child, and the rest would be set aside for a $100,000 endowed scholarship to be split among multiple students in the future.

Patterson also led the planning of the event, which she said made her nervous about whether it would be successful. In the end, she was pleased with what the SGA had accomplished.

“I’m extremely happy with it,” Patterson said. “I was afraid nobody would come. I think it looks pretty good, and I’m happy with how it turned out.”

Prizes were also awarded to several people in attendance, including an iPad Mini as well as gift cards to various restaurants and stores around the Lynchburg area.

Live music from the Liberty Jazz Ensemble was played throughout the event as students snapped pictures, talked among friends and enjoyed the chance to wear their best clothes.

“It’s fun to come get dressed up,” Liberty sophomore Jeff Brainard said. “This is the first legitimate formal event that I’ve been to at Liberty so far.”

Patterson said that, in her opinion, part of the reason that the gala was so successful is because it gave students the chance to dress in style.

“I think it’s not something that students get to do often,” Patterson said.

Brainard did not initially plan to attend the gala, but he ended up going with his friend Jenna Ragusa, who was part of a surprise that SGA had in store for those in attendance.

Everyone gathered in the center of the room at 8 p.m. as members of D-Trex Dance Crew, a hip-hop team made up of Liberty students, performed in dress clothes. It was no easy feat, according to D-Trex member Jaclyn Wallace.

“It was hard, but we wanted to make it like a flash mob,” Wallace said. “It was fun.”

Wallace also said that D-Trex normally performs about once or twice each weekend, but this weekend was especially busy. In addition to two performances at the gala, the crew also performed at Unity Fest earlier Saturday, April 6 and Coffeehouse, Friday, April 5.

“We’re such a tight family since we’re always together,” Wallace said.

As the night drew to a close, music from the Jazz Ensemble brought the “Black and White Affair” to an end.