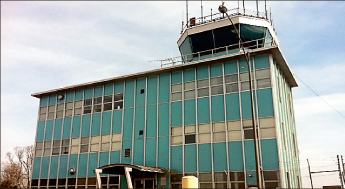 The Federal Aviation Administration (FAA) announced Friday, April 5 that it would delay the closure of 149 federal contract airport control towers around the country until June 15. The move gives Liberty University’s School of Aeronautics (SOA) more time to prepare for the loss of tower operations.

While the idea of an uncontrolled airport may concern people unfamiliar with aircraft operations, it is not uncommon. According to the Aircraft Owners and Pilots Association (AOPA) Air Safety Foundation, more than 12,000 non-towered airports operate daily around the United States. Airport — FAA-certified air traffic controllers will no longer be on staff at the Lynchburg airport starting June 15, but the move is not expected to affect travelers. Photo credit: Ruth Bibby

“We operate airplanes out of uncontrolled or non-towered airports all over this country … so even though it will have an impact on our operations, it’s not the end of the world,” SOA Dean and retired Air Force Brig. Gen. Dave Young said. “The thing that is interesting about the Lynchburg airport tower closing is that it’s a very busy airport, and we — Liberty University and Freedom Aviation — are about 70 percent of the operations here.”

However, Young does not anticipate any impact on Liberty or Lynchburg residents who are not members of the local aviation community. Because the tower is only open from 6:30 a.m. to 10:30 p.m., aircraft, including the airlines, already fly to and from the airport without tower guidance on a daily basis.

“As far as the School of Aeronautics is concerned, if we didn’t take any action, it would have a very significant impact — and there is still potentially going to be one — but we’ve already designed procedures that we will enact on top of what guidelines are provided by the FAA already.”

According to Young, SOA pilots already have to fly to other airports as far away as Raleigh-Durham for training, but they may have to increase those flights to gain experience working with air traffic controllers.
The school may also be forced to reduce the number of simultaneous local training flights.

With the current fiscal climate in Washington, D.C., Young said that the return of federal funding to maintain the tower is unlikely. According to a press release from the FAA, sequestration is forcing them to cut $637 million from its budget, and tower closures are only part of the solution. As a member of the Virginia Board of Aviation, however, the dean is working very closely with airport director Mark Courtney and other individuals who would have an interest in keeping the tower open.

According to Young, it is important to look at opportunities available should the tower still be forced to close.

“The SOA may be able to provide weather and advisory services to enhance safety and mitigate the fact that there is no tower,” Young said.

“A further look would be, is there a possibility of even utilizing the tower for training?” Young said. “An air traffic controller program here at the School of Aeronautics, utilizing the tower as a lab, I don’t know. But we’re looking at all opportunities, so even though I would personally prefer the tower stay open, when things like this occur, you’ve got to look for how you can turn this situation around so it has a positive benefit, and I think we can do that.”