Battle of the Bands showcases talent 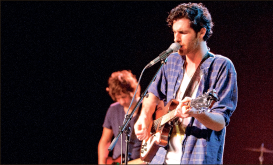 Musically inclined students were given the chance to showcase their talent and compete for $1,500 in prizes at the Battle of the Bands, an event that rocked the Tilley Student Center April 19 at 8 p.m.

In order to compete in Battle of the Bands, the public voted on which band they wanted to compete out of the nine bands that applied to the competition. Marczewski — the one participant who is normally a solo artist — employed the help of other musicians behind her during the competition.

The night began with Glass Oaks and Chasing the Horizon performing to a crowd of more than 250 students.

According to the rules stated by Student Activities’ hosts before the night began, each band was required to perform an original song and a cover of a song.

Adalia was next to perform, announcing that Battle of the Bands was the band’s first big debut since returning from a break. Adalia played a cover of “Radioactive” by Imagine Dragons and brought an Indie, alternative vibe to their music. Although Adalia was not a final contestant, the band seemed to be a fan favorite of the evening, as the performance was met with cheers from everyone in the room.

Another band, Pilgrim, is an experimental instrumental band of three students, according to its Facebook page. Pilgrim performed a cover of a Mute Math song before playing an original song, the only purely instrumental, original song of the evening. The final performance was Jane Marczewski, who covered a song by the Civil Wars before performing her original song. As the only female performer, Marczewski faced a different kind of pressure than the other bands.

“It’s a complete moment of pride being able to stand out as a female artist, and I had a blast,” Marczewski said.

Throughout the night, students’ tweets were projected onto a screen above the stage if they included “#SAbattle” in their message. Even Liberty University co-founder Elmer Towns tweeted about the event, saying, “The talent at the #SAbattle is great. Good job, youngsters.”

Students voted for Native Blood and Jane Marczewski as the two finalists of the evening and the competitors for the final prize.

Once both finalists had performed, the final round of voting opened for students, and the wait for the winner was almost over.

In the end, it was Native Blood who won the Battle of the Bands and the ultimate prize. Once the winner was announced, all of the competitors came together to congratulate Native Blood and revel in the success of the night.

“We are friends with all of the other bands who performed, so it wasn’t really a competition,” Thornley said. “We had fun just sharing the stage with such talented people. We are so appreciative to be voted the winners and had such a great time tonight.”

The Battle of the Bands was planned by Student Activities, a team of students and staff who, according to their website, plan various events on campus.

More information about the bands that competed can be found on their Facebook pages.

ShareTweet
tagged with battle of the bands