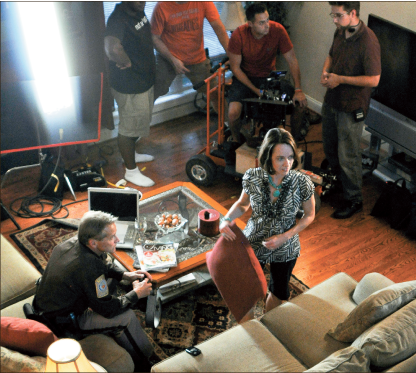 According to a Liberty News Service article, the purpose of “Finding Faith” is to educate families on the dangers of the Internet and to teach children how to not fall prey to online predators. The movie is based on the true story of a teenage girl who was abducted after sharing excessive information with a skilled online predator. The film records the events that take place before, during and after the abduction and features the challenges that the family will face. The Safe Surfin’ Foundation is led by Sheriff Mike Brown, who holds 42 years of law enforcement experience, in addition to the Bedford County Sheriff’s Department and the Internet Crimes Against Children Task Force (ICAC). Under Brown’s guidance, the task force has maintained a 100 percent conviction rate per strict guidelines that have targeted active Internet predators.

At an April press conference, Brown shared his goals for the film and the role that ICAC would play.

“To the sexual predator, we are the wolves,” Brown said. “We have, in a number of ways, set the bar for other task forces. For that, I am very proud.”

Thomas Road Baptist Church, Liberty Christian Academy and Liberty University contributed to the project and are highlighted in the film as a result.

“We knew this was the avenue we wanted to go — utilizing Thomas Road and Liberty University for support — and they’ve been great,” Brown said. “We couldn’t have asked for anything better.”

The majority of the people involved in the production were affiliated with Liberty in some way, Jason Campbell, Liberty alumnus and executive producer of the film, said.

Around 400 volunteers were distributed among 12 teams, and more than 200 people were involved in the cast and crew. Some of those teams included prayer and encouragement, food services, production and post-production, wardrobe, set design and construction.
“We had so many people come out the first day of filming that I didn’t know what to do with them all,” Campbell said.

In addition to noted actor Erik Estrada, among those starring in the film is Stephanie Bettcher, a senior worship studies major. Bettcher plays the lead role of Faith Garrett, a 14-year-old teen who finds herself in an unpredictable situation.

“My character, Faith, is the typical teenager,” Bettcher said. “She’s the head cheerleader, popular, loves the Lord, but she is also very into social media — so much so, that I start talking to this guy online who poses as a 16-year-old. It spirals downward from there.”

Because she played a character six years younger than herself, Bettcher had the opportunity to work with a variety of people ranging from all ages.

“A lot of people (who) played my friends in the movie were actually 14, so it was different, but fun,” Bettcher said.

Growing up, Bettcher participated in a variety of theater pieces — from middle school plays to high school productions. However, since coming to Liberty, she has been focusing on singing.

“I do love acting. In fact, doing this movie rekindled some feelings of pursuing it in the future. If God puts an acting job in my lap, I’ll run with it,” Bettcher said.

“Faith’s abduction really hit my character, Ashley, hard and affected the way she acted,” Falwell said. “Because Ashley spent all of her time with Faith, you can imagine how hurt and upset she was when she found out about the abduction.”

Even before the filming for “Finding Faith” had begun, Bettcher and Falwell had formed a friendship through participating in the Virginia Christmas Spectacular productions at Thomas Road together.

Those involved in the film are hoping that it will be a comfort to the public, especially to those who have been affected by online predators.

“I really want this movie to be an encouragement to both Christians and non-believers and to let them know God is there with them through anything that happens, good and bad,” Falwell said.

Bettcher added that in the movie, the Garrett family struggles to unite in such difficult circumstances and realizes the importance of God’s presence in their lives.

“The Garrett family understood that they had to trust God,” Bettcher said. “I believe this movie will be a great resource to those wanting to know more about the dangers of sex trafficking and how to be safe against Internet predators. I’m hoping that it’ll open parents’ and teens’ eyes to be extra cautious.”

The premiere is set for mid-January at Thomas Road Baptist Church.