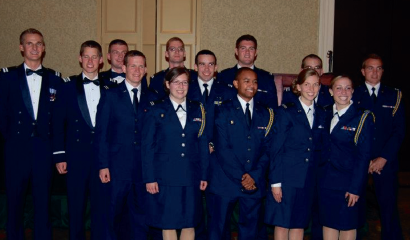 Liberty University will witness eight brand-new second lieutenants commissioning into the U.S. Air Force at 3 p.m. Friday, May 11, in a special ceremony at the Tower Theatre. Williams will be transitioning into pilot training with the goal of flying fighter jets. It will be a yearlong training regimen after passing initial flight screening, where the Air Force weeds out initial pilot candidates.

“I would love to fly fighter jets, but I’m open to anything,” Williams said. “I’m open to wherever the Air Force takes me, and I’m excited to see what kind of flying I like.”

According to Williams, pilots often intend to fly fighters but find they enjoy the flight and lifestyle of other types of aircrafts instead. Larger aircrafts like transports — nicknamed “heavies” — offer more opportunities for travel and overseas stations. Either way, Williams is looking forward to flying for the military.

“I’m kind of excited for pilot training — nervous excitement — because it’s going to be a lot of studying, a lot of long hours,” Williams said. “It’s also going to be what I love, so that’ll make me amped up to do well.”

Another cadet will be stationed with her husband at Columbus AFB, Miss. Morrissey married her husband Sam — who commissioned from Liberty last May — in January, right before he started pilot training in March. As a Force Support Officer, Morrissey could hold a number of jobs on base, but she is currently studying Swahili for the Department of Defense.

“I will also be travelling to Kenya for eight weeks for the second summer in a row through a Department of Defense program called Project GO,” Morrissey said. “Project GO is a program that enables ROTC students to study critical languages for the Air Force.”

Morrissey said it has been tough being away from her husband, but she is “extremely proud” of him and his accomplishments.

“When you marry someone in the military, you have to expect to spend some time apart, but, like I said, I am so very proud of him and support him in every way,” Morrissey said. “He is always very supportive of me as well. I am really excited because he is able to come to commissioning and will be administering my oath of office.”

Williams is also looking forward to having his family members attend commissioning.

“That’s the best part of our commissioning, I would say — having our families there and having them pin our (second lieutenant rank) bars on our brand-new uniforms,” Williams said.

Of the other six commissioning cadets, Abramowicz will be a Financial Management Officer, Cromer will be an Air Battle Manager, Marino will be a Space and Missile officer, Moser and Vaughan will enter Security Forces and Warren will be an intelligence officer.

“I cannot think of a more honorable thing to do than to have the ability to serve my God and this country,” Morrissey said. “Through ROTC, I have not only learned life skills such as discipline and leadership but have developed some great friendships. In a lot of ways, we are like a big family. I am proud to have the seven other Liberty cadets by my side to commission on May 11, and wish them the best of luck as we go off into the ‘wild blue yonder.’”