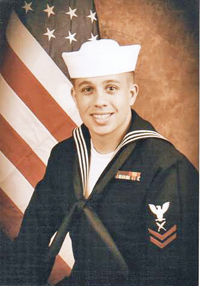 Liberty University student Petty Officer 2nd Class Todd Williams spent one year in college before enlisting in the U.S. Navy — in part to help pay for the year’s $15,000 in student loans. Yokosuka — Williams was stationed in Yokosuka, Japan when the 2011 earthquake and tsunami hit. Photo provided

After enlisting in November 2005, he worked as a Full Time Support (FTS) office worker stationed in Virginia Beach.

“More or less, (FTS) is active duty reserves,” Williams said. “I worked at the different commands where the reservists would come in and do their two days a week and two weeks a year, and I was in support of the reservists.”

Following his three-year station in Virginia Beach, Williams shipped out to Yokosuka, Japan — a city at the mouth of Tokyo Bay and 200 miles south of the now-infamous Fukushima Daiichi nuclear power plant.

Williams continued his FTS work at Yokosuka Naval Base as one of only two FTS sailors at his command.

Just as Williams was preparing to leave Japan after his two-year station, the magnitude 9.0 earthquake and tsunami shattered the country March 11, 2011. Even though he was hundreds of miles south of the quake, he felt its effects immediately.

Williams was in the process of turning his apartment back over to the landlord to move out when everything started shaking. “My apartment was on the fourth floor, and there was another building maybe within 50 feet from our building, and you could feel and see them shaking,” he said.

Japanese ingenuity saved the surrounding areas from any major damage, according to Williams. Newer buildings were built specifically to survive large earthquakes.

“The way it works is that, in the newer parts of Japan, the buildings aren’t attached to the ground physically — they’re set on rollers, so when the ground shakes, the buildings don’t break,” he said. “The main area that got hit, though, was an old part of Japan, so that’s why the earthquake just decimated everything — everything was torn down.”

Every ship in port left immediately to help with the recovery effort, including aircraft carrier USS George Washington, and fleet staff were flown in to oversee everything. The fleet detected minor traces of radiation, Williams said, but it was nothing to be concerned about.

“Within a few days, there were very minor detections of radiation in Yokosuka, which is about 200 miles south of Fukushima, but the amount of radiation was so minor that it didn’t mean anything,” he said. “It’s only within those 12 miles (around the Fukushima Daiichi power plant) that it’s really nasty.” Shipping out — Sailors aboard the USS George Washington aircraft carrier receive their orders to head north and assist with the recovery effort. U.S. Navy photo

After leaving his FTS role and officially joining the Navy Reserves, Williams returned to his old command at Yokosuka in July and August 2011. Some of the other sailors told him they had been on 12-hours-on, 12-hours-off shifts for two months straight assisting the Japanese people.

The U.S. government has a Status of Force Agreement (SOFA) with Japan. According to Williams, it is basically a contract saying that the U.S. agrees to station forces in the country to help in times of crisis.

“Japan has asked us to be there, and it’s more or less what we do here (in the U.S.) — be on guard,” he said. “Having duty stations and ships all over the world is just a quicker way to respond to different catastrophes.”

While the Navy may call upon him to help with crises in the future, for now, Williams will be studying mathematics for three more years at Liberty. He goes to Greensboro, N.C. once a month and to Norfolk, Va. two weeks a year for his Navy commitment.

Following graduation, he intends to enroll in a master’s program and renew his Navy contract for another six years with the ultimate goal of becoming a math teacher.