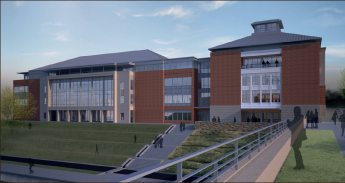 The Jerry Falwell Library ground breaking event for Liberty University, which was originally set to happen March 5 at 10:45 a.m., has been moved to Wednesday, March 7, because of inclement weather. Architecture — A rendition of what the lakeside view of the library will look like. Liberty University graphic

Jerry Falwell Jr., members of the administration and Board of Trustees will be among those breaking the ground of this new project Wednesday.

According to a news release, the library is part of a $120-million construction transformation project that will take place over the next five years. The library accounts for $50 million of the $120 million.

Dean Carl Merat of Liberty’s Integrated Learning Resource Center (ILRC) said that those individuals involved in this project are excited to see it finally take place.

“We are elated. It is the culmination of almost 15 months of work, and (the ground breaking) represents the beginning of the literal building stage. We are definitely ready to move off of the page and into the true construction of this building,” Merat said.

The library will be a four-story structure that encompasses 170,000 square-feet at the center of Liberty’s campus, where the Schilling Center currently sits, according to the news release. It will overlook a new, man-made lake located behind the Vines Center.

According to Merat, there is currently no final decision about what will happen to the old library.

“We anticipate the majority of the first floor will move to the new building, but the computer classrooms will remain in DeMoss,” Merat said. “The current plan calls for the Curriculum Library to remain in place on the first floor of DeMoss for now, and later join the School of Education in their new location when that is decided.”

The ILRC and Liberty administrators are currently working with a nationally recognized library consultant to develop customer personas, journey maps and service blueprints for the new building, Merat said.

“We hope to keep the impact on the current facility to a minimum, but expect there will be several changes we need to undergo before the building opens,” Merat said. “We will do everything we can to keep everyone informed well in advance and all along the way.”