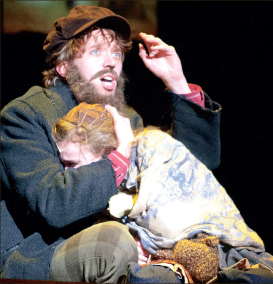 The sound of change — Liberty students Taamu Wuya (right) and Ciji Prosser (left), who play Coalhouse Walker and his beloved Sarah, use performance to illustrate the tensions faced by the black community at the break of the 20th century. Photo credit: Ruth Bibby

Hailed as a modern classic, the musical “Ragtime” opened in the Liberty Tower Theater Feb. 17 and captivated a sold-out crowd.

“I thought it was fantastic,” senior Melinda Bendik said. “I really liked how it highlighted modern-day life and how we’ve become more tolerant of other races and cultures.”

Rhythmically narrating the clash between black Americans, the white American society and the incoming immigrants, “Ragtime” used both fictional and historical characters to show America’s evolution at the start of the 1900s.

“Ragtime” was the second show Bendik had seen in the Tower Theatre, having seen Liberty’s production of “Phantom of the Opera” last spring. Displaying humanity — Carson Burkett, playing Tateh, held Kate Pittard, who took on the role of his little girl, displaying the trials faced by immigrants at the turn of the century. Photo credit: Ruth Bibby

“Phantom was amazing, but I enjoyed this so much, maybe even a little bit more, because of the diversity in it,” Bendik said.

The play, originally produced in 1996, is a production adapted from E.L. Doctorow’s 1975 novel “Ragtime.” Liberty’s adaption of the show includes a full live orchestra, crew and a 49-person cast.

“Doing Ragtime, which is the story of the turn of the century and the historical figures that were part of the show, everyone was so strong,” Liberty performer Taamu Wuya, who played the part of Coalhouse Walker, said. “Mr. Nelson has done a great job. The cast and crew, especially the orchestra, came together to do a really fine job on this.”

Contrary to the large cast performing on stage, the set pieces used were minimal, drawing attention to the characters and the themes portrayed, according to ensemble member McKenzie Connell, who played one of the immigrants entering America.

“So much relies on the characters and their movement, not so much the set,” Connell said. “It becomes more about character building and the process.”

With a mix of mime and purposeful use of props, each actor displayed the tension between classes and race, leaving much up to the imagination of the audience.

“I think that it was a lot to ask (for the actors to work with minimal set pieces). Actors aren’t used to moving set pieces, but they’ve taken it and owned it,” director Chris Nelson said. “I think that’s the essence of the show. It’s owned by the group and owned by the people — no matter what class or ethnicity. What gives it that neat effect is that, at times, all of them will be moving something together and yet they are still apart. It still continues to tie in that idea of brokenness.”

As broken as the musical phrases of the ragtime melody, each set showed the humanity of characters caught at the crossroads of past and present.

“You see the ugliness of people, which is really important to notice,” performer Ciji Prosser, who played the part of Sarah, said. “It’s important to realize that people are ugly and unwilling to change until change just forces itself upon them.”

According to Prosser, the way that ragtime music infiltrated America became a metaphor for the other changes displayed in the show.

“Music played a huge role,” Prosser said. “Taamu and I did a lot of research on ragtime music and Scott Joplin music and how large of a part it played in African American culture and how it infiltrated the rest of society. Ragtime music, and music itself, played a large role in the turn of the century.”

Liberty’s cast and crew continue to prepare for upcoming shows and are encouraging students and Lynchburg residents to join the audience. The remaining show times are Feb. 24, 25, March 2 and 3 at 7:30 p.m., and Feb. 26 and March 4 at 2:30 p.m.

Tickets are available at the Vines Center Box Office or online at liberty.edu/theatre.