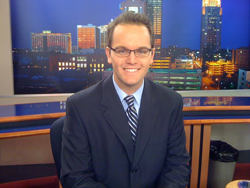 A career highlight for Pat was reporting from the NCAA Final Four in the spring 2011. Photo provided

A sports anchor covers more than just the scores

When the sports segment rolls around on the Fox 41 news program in Louisville, Ky., Pat Doney (2007) knows how to keep the non-sports fan from hitting the mute button. Pat, a 2007 graduate of Liberty University, injects the human interest element into the sports stories he covers, something he calls the “My Mom Factor.”

“My mom can’t stand sports, but even she’s not turning the channel if there’s a story about a horse trainer in a wheelchair preparing a horse for the Kentucky Derby,” Pat said.

Pat has covered a slew of inspirational sports stories, including profiles of a one-armed football player, a swimmer with a condition similar to Down Syndrome and a deaf football player.

His knack for finding that heart touching feature story began during his early years at Liberty.

When he arrived at Liberty as a freshman, Pat became a pioneer in sports journalism on a campus where it had not been emphasized.

“In my opinion, there is no teacher, advisor or textbook that can readily prepare you for when that microphone is turned on and the red light on the camera begins flashing. What can teach you is experience. I had an unbelievable experience at Liberty because, at the time, it wasn’t known for sports reporting,” Pat said.

To gain that experience, Pat immediately immersed himself in covering Liberty sports with both print and broadcast mediums. He wrote a front page sports column for the Liberty Champion called “The Bottom Line,” a sarcastic take on popular topics which Pat said pushed the limits. He co-hosted a sports talk show on 90.9, The Light. He and a friend aired play-by-play for baseball games on the radio. He also did public address announcing for Liberty lacrosse games at Williams Stadium.

Pat, a native of southern California, said those experiences gave him the skills to get a sports internship at KABC-TV in Los Angeles.

Driving an hour everyday to learn under some of the best sports reporters in the business for his internship was “priceless,” Pat said.

“The work was amazing. The passion was inspiring. The people were incredible. The most important thing I learned was that creative, inspiring storytelling can keep every type of viewer, not just sports fans,” Pat said.

Pat credited KABC reporter and anchor Curt Sandoval for teaching him that early version of the “My Mom Factor.”

“He (Curt) uses Emmy statues as doorstops — he’s won nine. Curt took me under his wing and taught me the foundation of the business,” Pat said. “It’s a gift I’ll never be able to repay.”

While studying broadcast journalism at Liberty, Pat worked as the sports editor on the Champion staff for a year. He also used his broadcast skills off-campus where he was a news and sports reporter and photographer for WSET-TV.

After graduating in 2007, Pat took several jobs before landing at Fox 41 in Kentucky. He was the sports director at a cable news program in Rock Hill, S.C., before moving to Fayetteville, Ark. to work as the weekend sports anchor at a news station there.

During his three years at KNWA/KARK-TV in Arkansas, Pat’s reporting earned him national recognition. One of his pieces, The Legend of Rotnei Clarke,” was nominated for a 2010 Emmy in the sports feature category. The feature told the tale of a basketball player whose strong work ethic helped him score an average of nearly 40 points per game in his high school career.

“I had a great time with the creativity — opening the piece with a flash of a camera revealing Rotnei in a dark room, and starting with the line, ‘In a flash, Rotnei Clarke can change a game.’ I put a ton of work into that story and was really happy with how it turned out,” Pat said.

Now at Fox 41 since July 2010, Pat said he would do his job for free but doesn’t want his boss hearing that anytime soon.

“My job is to go to sporting events, and then talk about them. It doesn’t get much better than that,” Pat said.

Raised in a Christian home, Pat got saved when he was 5 years old. He has struggled to find a way to share his faith in such a secular field. He says the best way is to let the people tell their testimony through the story.

“For example, Rotnei Clarke wants to be a pastor someday, and a portion of his story was about his walk with Christ and what a relationship with God has done for his life,” Pat said.

Pat encourages journalism students, particularly those interested in sports, to get internships, be the best employee or intern wherever they are and to find a mentor.

“If you observe how the best in the business are doing it and emulate that, you’ll eventually be the one being emulated,” Pat said.

Pat met his wife of almost four years, Sheleena, at a Liberty Block Party. He even remembers the date—Tuesday, Aug. 24, 2004.

“I saw Sheleena talking with one of my friends, Tim John, who I had just talked to 20 minutes earlier. I walked up to Tim and repeated the whole, ‘Hey, how was your summer?’ routine. He looked at me like I was crazy. It was all just to introduce myself to her.”

Pat said he fell in love with her instantly, and they got married the summer after they both graduated in 2007.

In his spare time, Pat enjoys playing basketball and golf, working out, cooking, traveling and watching sports. He is also a passionate fan of the Los Angeles Angels of Anaheim baseball team.

This spring, Pat covered the Final Four in Houston and worked on the story of a horse trainer in a wheelchair who is preparing a horse for the Kentucky Derby.

“Covering one of the biggest events in sports (the Final Four) was an incredible experience, and one that I won’t soon forget,” Pat said.