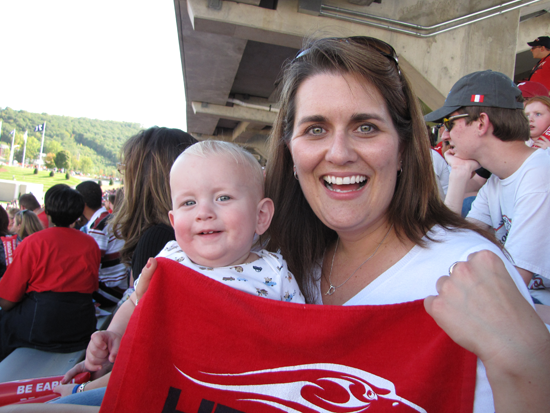 Pam and her nephew Aidan take in a Flames football game. Photo provided

After spending more than 15 years in the newsroom, Pam Walck (1994) is back in the classroom. Pam and her brothers Phillip and Nathan enjoy a sunny graduation at Williams Stadium. Photo provided

Pam considers her education an investment.

Pam completed her undergraduate degree in print journalism at Liberty University in 1994.

She is now studying to receive her master’s degree at Point Park University in Pittsburgh, Pa., with the ultimate goal of becoming a professor.

Between her years at Liberty and now Point Park, she worked several different beats at various newspapers. Her most rewarding experience was covering a military unit at The Savannah Morning News in Georgia.

“Many of these women didn’t even feel like they had a story worth telling. Just to be able to tell their story, their part of history was an amazing gift,” Pam said.

“The reality was that it’s such a bureaucratic system that change is not instantaneous and it’s not quick,” Pam said. “John’s story was unfortunately too much like many other soldiers’ experiences.”

“I was having dinner with some friends and talking smack about how I was going to be editor of the campus paper someday. My friend looked at me and said, ‘You’re not even writing for them.’ I said, ‘Oh, you’re right!’”

Pam determined to accomplish her goal.

She became a sports reporter that year, then the news editor junior year and finally the editor in chief the last semester of her senior year.

Pam was frustrated on occasion by the censorship at Liberty, but overall “felt the administration was fair with us as a student press … (It) taught me life lessons.”

“I remember feeling frustrated at times because the administration had to approve all of the pages,” Pam said. “Back in those days, we had to take dummies of all the pages up to Dr. Falwell’s office and get him to approve them.”

However that frustration taught her a lesson she used out in the journalism field.

“When you get out into the ‘real world,’ the same stuff happens so I think learning how to handle those frustrations and meet them in a professional manner was probably a really valuable life lesson,” Pam said.

After graduating in May 1994, she was an intern for “The Hazleton Standard Speaker” just south of Scranton, Pa. before accepting a full-time position at the Kutztown Patriot, a weekly newspaper. From there, she was hired by the Pottsville Republican before heading to “The Savannah Morning News” where she started as a county government reporter. After two and a half years, she climbed the corporate ladder to an assistant editor position and eventually government team editor.

“Editors are kind of at the mercy of reporters that they meet their deadlines,” Pam said. “Sometimes I got out at a decent hour and sometimes it was dreadful.”

After completing her goals of being a reporter and editor, Pam tackled the teaching field. She taught three semesters as an adjunct professor at Savannah State University.

During that time, a supervisor regretted the fact that she did not have her master’s degree.

“One of the administrators said, it’s really too bad you don’t have your masters degree, we’d hire you full time if you did,” Pam said.

Pam took that to heart.

“I mulled it over for a while and then finally decided that things weren’t changing where I was. I was ready for a new adventure, so I walked away from a good paying career and health benefits,” Pam said. “I decided to do it because life is short and what’s the point of talking about it if you’re not going to actually put it into action.”

She enrolled for the fall 2010 semester at Point Park and is beginning her second year. She also hopes to attend either Penn State or Ohio University for her doctorate with the goal of becoming a college professor.

“To be able to explain something to a student who is just as eager as I was to learn about this profession that I absolutely love, to talk to them and kind of see the light bulb go on as they’re learning their craft and learning to find their writing voice, it was a really amazing experience,” Pam said.

A Focus on the Family DVD series “The Truth Project,” which looks at the foundations of the Christian faith, has strengthened her resolve as a professional and a woman of faith.
One of the lessons in the series discusses the difference between God’s Truth and secular truth.

“I think as a believer going into journalism where it is all about the pursuit of truth, small ‘t,’ knowing and understanding what Truth is, capital ‘T,’ impacts how you approach your profession and how you search for truth,” Pam said. “It gives you this groundwork or this foundation that journalists who aren’t of faith or who don’t have that strong ethical background don’t ever understand.”

She recalls how often her pastor in Savannah used to remind the congregation that statistically, within three years of a person’s conversion, most Christians no longer have non-believing friends. They surround themselves with believers. “This is in opposition to the life Jesus led – he was in the marketplace, pursuing relationships with non-believers all the time. As a Christ-follower, I feel it is something we should all be doing. And frankly, it was what motivated Dr. Falwell to start Liberty in the first place.”

Pam’s pursuit of God’s Truth may lead her to teach at Liberty University.

“Originally my goal was to go back to Liberty to teach there. So I don’t know if that door will ever open or not,” Pam said. “I figure it would be really fun to do that, but wherever God opens the door is where I’ll go.”

In her spare time, Pam enjoys spending time with her family and friends, DVRing her favorite TV shows and running.

“I ran my first race this past September in Pittsburgh, and it was really just an amazing experience,” Pam said. “It lent perspective to Paul’s words about running the race.”