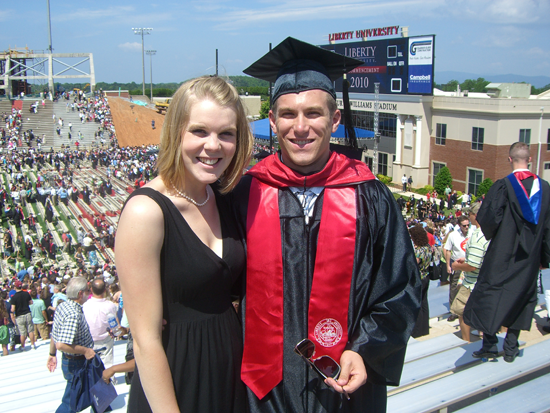 Mitchell and Becky at his graduation from grad school in the spring of 2010. Photo provided

Mitchell Malcheff (2008) knows that no amount of education can prepare a person for writing in the field of journalism.

He learned this sitting in Kent and Carolyn Terry’s living room, just days after their son Brian was shot on a United States Border Patrol mission in Arizona.

“They were crying, and I was trying to ask about their son who was murdered,” Mitchell said. “They were a little leery of what I wanted at first, but they called me and did an article.”

Mitchell was covering the death and homecoming of Agent Brian Terry for “The Hillsdale Daily News” in Michigan.

Terry was a native of Hillsdale who served in the military for three years before joining the Border Patrol. He was shot by Mexican bandits in December 2010.

“In the end, the Terrys really did appreciate the tribute to him,” Mitchell said.

When Mitchell began studying at Liberty seven years ago, he wasn’t sure he wanted to be a writer.

“I didn’t really know what I wanted to do until at least my sophomore year,” Mitchell said. “I tried a couple of different things. I thought I wanted to be a teacher or maybe go into business, but that didn’t really appeal to me after I looked into it.”

Mitchell’s decision to declare a print journalism major was influenced by his love of sports.

“I’ve always been a really big sports fan,” Mitchell said. “So I decided that I wanted to be a sports writer because they pay you to go and watch games.”

After completing his undergraduate degree in 2008, Mitchell decided to pursue a master’s degree at Liberty.

During that time, he freelanced for “Lynchburg Living,” “The News and Advance,” “The Nelson County Times” and “The Amherst New-Era Progress.”

He was also a graduate assistant for Deborah Huff’s “Champion” practicum.

“Freelancing was nice because you get to set up your own hours,” Mitchell said. “But I can’t imagine how people survive doing that as a career because it doesn’t pay very much. Still it was a good learning experience.”

Mitchell boosted his resume by writing on a variety of different topics.

At “The News and Advance,” he covered high school sports. At “Lynchburg Living,” he covered community features. At “The Nelson County Times” and “The Amherst New-Era Progress,” he reported on local news.

“I did one for ‘Lynchburg Living’ that I liked. I think it was called ‘Locally Lynchburg,’ and it was about the importance of frequenting local businesses instead of just going to Wal-Mart,” Mitchell said. “It was nice to talk to people who are dedicated to maintaining the neat things that Lynchburg has to offer.”

In the spring of 2010, Mitchell finished his master’s degree and launched himself into the job market. Within three months, he sent out between 40 and 50 job applications to various markets.

“The most frustrating thing is that a lot of places don’t always get back with you,” Mitchell said. “You know, even if they think I’m the worst candidate in the world, it would be nice to hear them tell me.”

Mitchell and his wife Becky, who married in 2007, decided on an ultimatum. If Mitchell could not find work by the end of July, they would move back to either of their hometowns.

The next month they moved to Hillsdale, Mich., where he found a job at the local newspaper.

Mitchell started as a general projects reporter at “The Hillsdale Daily News” in September 2010 and was then promoted to assistant news editor in January 2011.

Within the first few days at the newspaper, Mitchell was able to use some of the knowledge he received from Mrs. Huff at Liberty.

“She hammers home different things about knowing how to work with numbers, like millages,” Mitchell said. “I was working on a pretty important story that dealt with a millage. So I had to work with those numbers. You have to know how to explain it.”

Mitchell’s work as an assistant news editor required a lot of work and dedication.

“I work most days. I come in at noon, and I don’t come home until midnight. So the hours are not the best,” Mitchell said. “They tell you that a lot but until you experience it, you don’t really know what they mean.”

Working on a small staff, Mitchell wears several hats, including those of writer, editor, photographer and layout designer.

“I like the feeling of putting together a page that looks good in the paper the next day, but I’d much rather focus on writing,” Mitchell said.

Mitchell said he enjoyed the atmosphere of working on a small local newspaper.

“I like the community aspect of it, which you don’t really have in a bigger paper,” Mitchell said.

Mitchell and Becky are now in a transition stage, since they very recently moved back to Virginia, outside of Washington D.C.

The couple is also expecting their first child.

While Mitchell searches for a job outside of D.C., Becky will be managing a jewelry store there.

Mitchell has already contacted several Liberty and Lynchburg affiliates who could help him connect to a job, including the Liberty Alumni Club and “Lynchburg Living.”

“I’ve been doing my best to send off emails to lots of LU people in the area and try to work connections to find another job,” Mitchell said.

Mitchell said his dream job would be to cover college basketball for a major news outlet.

But at this point, he is willing to settle for any open position at a newspaper.

“In these first jobs, you don’t really get to be very choosy,” Mitchell said.