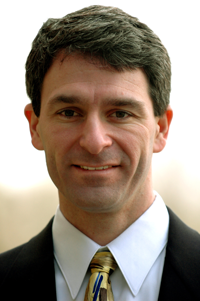 Virginia Attorney General Ken Cuccinelli addressed Liberty University students in the Helms School of Government on Wednesday, Sept. 28. He focused on Virginia’s pending lawsuits against the Federal Government and the exercise of states’ rights. Cuccinelli told the students that the United States’ system of checks and balances established by the Constitution obligates states to defend against overreaches by the Federal Government.

“When you have a Federal Government — as we do — that is so aggressively pushing beyond the limits of the law and the Constitution, then it is the states that are expected to step up and reign in that Federal Government,” he said.

Referencing the Federalist Papers, Cuccinelli said that James Madison was “very clear” in No. 51 that both governments — federal and state — would “control one another.”

“What we’re doing in the Attorney General’s Office of Virginia is exactly what the Founders envisioned that the states would do when the Federal Government overstepped its boundaries,” he said.

Cuccinelli mentioned several current lawsuits his office is engaged in, including the Healthcare lawsuit and cases against the Environmental Protection Agency (EPA) and National Labor Relations Board (NLRB). The EPA, which Cuccinelli called the Employment Prevention Agency, claimed that carbon monoxide and five other greenhouse gases are sufficiently dangerous to human health and that the agency should regulate them.

The NLRB case is in response to the board citing Boeing for “unfair labor practices” for moving aircraft manufacturing from its unionized plant in Washington State to a non-union plant in South Carolina.

“This has never happened before,” Cuccinelli said. “Not even in Colonial days did King George III and the Parliament try to exercise the amount of power our own Federal Government is exercising right now. This is federalism in action.”

Cuccinelli said he and many other attorneys general across the country are committed to “standing on the walls” and defending against such overreaches by the Federal Government.

“The government is the biggest lawbreaker of them all, and the Constitution is the document that governs the government,” he said. “It is that Constitution, by its structure, that expects someone in my role in the Commonwealth to step forward and check the Federal Government’s exercise of authority it does not have.”

Cuccinelli expects the cases against both the Healthcare Bill and the EPA to be decided by the Supreme Court at the end of their session in June 2012. He remains “cautiously optimistic” that the court will decide in favor of the state, at least with regard to the Healthcare Bill’s individual mandate.