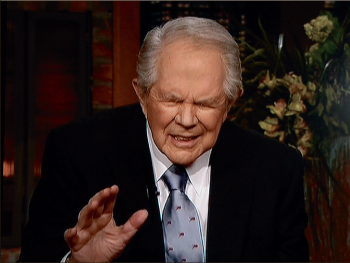 he Common Book of Prayer, where most wedding vows come from today, says, “To have and to hold from this day forward, for better, for worse, for richer, for poorer, in sickness or in health, to love and to cherish, ‘til death do us part.” ‘Til Disease do us part — Evangelist and host of The 700 Club Pat Robertson told a viewer Sept. 13 that he should seek a divorce from his wife who was diagnosed with Alzheimer’s Disease beacause it’s “a kind of death.” Photo credit: Google Images

Traditional wedding vows seem to be losing their meaning according to a recent comment by Pat Robertson, a Christian leader and host of The 700 Club. On Sept. 13 he told viewers of his show that divorce is okay when a spouse is diagnosed with Alzheimer’s disease because the condition is “a kind of death.”

An estimated 5.4 million people live with Alzheimer’s disease today, according to the Alzheimer’s Association website, and that number is expected to rise to 16 million by 2050. Despite Robertson’s answer that divorce is acceptable in these circumstances, couples affected by this disease do not usually split, Beth Kallmyer of the Alzheimer’s Association said in a news interview with ABC. In fact, she usually sees the opposite. “Families rallying around the person, like they would with any fatal or serious illness.”

Robertson’s ideology has gotten so far off base. If God wanted an Alzheimer’s clause to marriage, He would have put it in the Bible. This thinking is dangerous because it leads to a slippery slope. If the Christian community decides it is okay to divorce a spouse over Alzheimer’s, what is to stop the next matter of convenience? Before we know it, those diagnosed with cancer will be getting advice to divorce, and those with conditions that doctors predict to have “low survival rates” will consider it alright to end the marriage.

When asked by a viewer if a man whose wife has Alzheimer’s should get a divorce, Robertson replied yes but with a condition.

“I know it sounds cruel, but if he is going to do something, he should divorce her and start all over again, but make sure she has custodial care and somebody looking after her,” Robertson said.

However, some believe being taken care of by a loved one is irreplaceable.

“When being cared for by a spouse, the love of that spouse is often what enables a person with Alzheimer’s disease to continue on and not feel abandoned,” Rev. A.D. Baxter, a social worker with Cole Neuroscience Center at the University of Tennessee Medical Center, said in an ABCNews.com article.

The spouse doing the leaving may not think that their partner suffering with Alzheimer’s would care, yet Dr. Robert Stern of the Boston University School of Medicine says otherwise. “The feelings are the last to go. The ability to connect on some level, that’s the very last thing to go. The person may not remember the loved one’s name or what happened a few minutes ago, but they still can connect,” Stern said in an interview with ABC.

“Alzheimer’s disease is never an ‘accident’ in a marriage,” she said. “It falls under the purview of God’s sovereignty. In the case of someone with Alzheimer’s, this means God’s unconditional and sacrificial love has an opportunity to be even more gloriously displayed in a life together.”

Paul Goldman has been married to his wife, Edith, for 61 years, nine of which she has had Alzheimer’s disease. When interviewed by ABCNews.com Goldman said, “I don’t think he [Robertson] understands what love is.” 1 Corinthians 13 gives a very clear picture of true love in verse 4 where it says, “Love never gives up, never loses faith, is always hopeful, and endures through every circumstance.”

No one wants to do it alone when they have been told the hardest thing they have ever had to hear. When the hard times hit in life, it does not mean we take the easy way out. God gives us challenges for a reason. With every challenge God sends our way, He also sends a promise — that He will never give us more than we can bear, and that He will always be there.