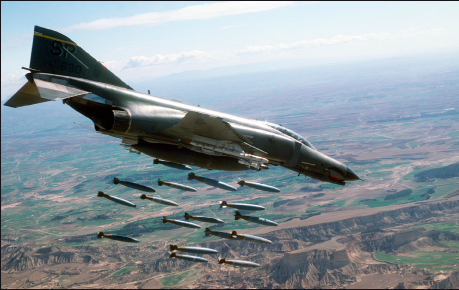 While Lt. Col. Chris McGreer may not be a student veteran, or even one of Liberty’s numerous faculty and staff veterans, he nevertheless has an impact on campus through his work with military students.

Throughout his career, McGreer has been heavily involved with Officer Christian Fellowship (OCF) and currently holds a weekly Bible study at his house near campus. McGreer, a graduate of VMI and a Vietnam veteran, served as a fighter pilot for roughly 15 years before becoming a chaplain.

McGreer loved flying and loved the intensity and pressure of being a fighter pilot. He flew F-4 Phantom IIs in active duty and the New Jersey Air National Guard (ANG) and A-37 Dragonflies and A-10 Thunderbolt IIs in the Pennsylvania ANG.

“I flew every single tactical fighter (and reconnaissance) mission you can fly in an F-4 … I got to taste everything, (be a) master of nothing, but it was a lot of fun,” he said.

The physical in flying fighters put the human body under tremendous strain. McGreer said that when he was in a Navy centrifuge during training, he contracted “G-measles” — a condition where blood oozes through the skin from the pressure of sustaining excessive G-forces. The condition reminded him of Jesus in Gethsemane when he sweat drops of blood through his anguish.

Perhaps the greatest pressure, however, was when McGreer finally left his plane to become a chaplain. One of his many duties was carrying out death notifications to parents and spouses of deceased veterans.

The first Air Force officer killed in Operation Iraqi Freedom was a member of the Idaho ANG where McGreer was then stationed. Maj. Gregory Stone, a 40-year-old with two children, was murdered by a Muslim-American soldier who threw a grenade into his tent. McGreer and an Air Force general delivered the news to Stone’s mother, but the distraught woman would not let them in the house.

“She was holding the screen door and wouldn’t let us in, because if we don’t come in, it wasn’t real,” he said.

McGreer gently pulled the door open, and the elderly woman fled into the living room. Her daughter and McGreer’s wife were there to help her.

“We want an experienced lady (to be there) so they can go hug (the mother), and she can cry on their shoulder,” he continued.

McGreer also said that the notification must be written out, because often the officer delivering the message struggles to maintain composure.

When he moved to Lynchburg to care for his ailing father, a World War II veteran who helped to break the Japanese code and set up the shooting down of Admiral Yamamoto, McGreer continued to work with OCF and reach out to the community and Liberty’s military students.

He said his love of country and experiencing the spiritual warfare against it drove him to become a chaplain and fight back. That love is keeping him busy helping to train the next generation of physical and spiritual warriors of America.