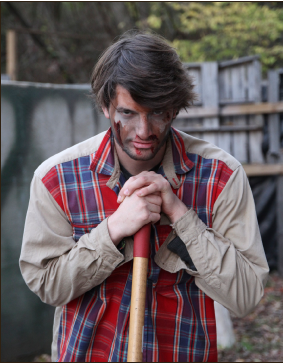 38 years of fright nights — Scaremare sees roughly 1,500 people a year give their lives to Christ after walking through the haunted house, according to Executive Director of Center for Youth Ministries Dr. Steve Vandegriff. Scaremare is staffed primarily by student volunteers.

For 38 years, Scaremare has been scaring and evangelizing over 300,000 people in Central Virginia with an average of 1,500 people giving their lives to Christ every year.

This year’s numbers will surpass previous years with currently over 1,200 people responding to the salvation message.

However, Scaremare has often been accused of scaring people into heaven by depicting scenes of death and mortality and then sharing the gospel message with them.

Dr. Steve Vandegriff, executive director of Center for Youth Ministries (CYM), says that the real goal of Scaremare is to show that there is an alternative answer to the question, “What happens after you die?”

“We’ve seen thousands of kids respond to the message (in the preaching tents),” Vandegriff said. “It’s not a message to scare them. It’s actually a message of hope and life.”

On Scaremare’s official website, it explains that “Jesus himself told the parables of hell (Luke 16:9).

He was not trying to ‘scare a decision’ out of people, rather, making them come to grips with the reality of judgment.”

Bryce Morris, junior at Liberty University and member of YouthQuest, a ministry team through CYM, which acts as Liberty’s recruitment team at Scaremare, responds to those who disagree with Scaremare.

“What doesn’t work for you, might work for someone else,” Morris said. “I think what goes further than the preaching tents are the people in lines, like people taking tickets or selling tickets. It’s the conversations, the identity of people seeing, hey, this is a Christian school, these people are nice, and this is a nice event. It’s a scary house, but at the same time, these are nice people.”

Last year, Morris said he was able to participate in the scaring aspect of the event.

One night in particular, he and a friend got to push a truck device through the Scaremare woods.

“It was the night that Jerry Falwell Jr. came through the line and we saw him. Our faces lit up. We were so excited,” Morris said. “We were like, man, what if we can scare Jerry Falwell Jr.? So we flipped on the lights and just started running with the thing. I saw him and Becky. They were genuinely scared. It was pretty cool.”

Scaremare, located on 2300 Carroll Ave., has three more nights to cause screams, Oct. 28 to 30 open from dusk to 11 p.m. The cost is $8 per person and $3 on Thursday with a college id. For more information, visit scaremare.com or e-mail scaremare@liberty.com.

STEARNS is a feature reporter.