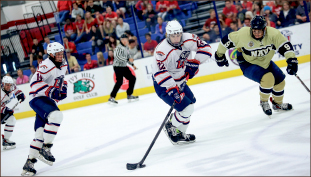 Liberty University men’s division I (DI) hockey, ranked No. 7 in preseason American Collegiate Hockey Association (ACHA) polls, battled their Sept. 19-20, 1-1 weekend series split versus the No. 12 Naval Academy in the mind as much as on the ice. The teams last met in the second round of last year’s ACHA National Championship tournament. The then-13 seed Midshipmen stunned the fourth-seeded Flames with a 4-3 overtime win, ending their season early and providing extra incentive for Liberty.

The Flames took the ice Friday, favored at every position, but ended the night in a 5-4 shootout loss. After jumping out to an early lead on goals from forward Colt Steele and defenseman Chase Harris, play on both ends of the ice turned rough. Heightened emotions, building aggression and a near-frantic pace found Liberty in the one spot from which they couldn’t score: the penalty box.

“We just kind of lost our heads,” defenseman Ben Hughes said. “We got undisciplined and wrapped up in our emotions, I think, just because it’s Liberty versus Navy and everything that stands for. … It was maybe just hard to get over the history between the teams.”

In 60 minutes of regulation play plus five minutes of overtime, the Flames acquired a total of 42 penalty minutes — including a 10-minute misconduct. Despite two more goals from forward Luke Hannon and linemate Luke Simon, the Midshipmen converted power plays and mutual man-down situations to even the score, take the game to shootout and get the win.

“(Penalties were) the difference in the game,” Head Coach Kirk Handy said. “Five on five, we looked strong and did a lot of things well. Penalties killed us tonight … and we’ll correct for (Saturday).”

Each of the players echoed Handy’s promise. Less than a day later, despite the frustrating loss, they made good on it. In a show of maturity, the Flames controlled the game Saturday afternoon from puck drop to final buzzer, posting a 6-2 win over the Midshipmen with pace and patience in stark contrast to the night before. “We knew coming into today that we needed to redeem ourselves from yesterday,” forward Luke Hannon said after the victory. “Yesterday we got drawn into a few of those penalties there, and we knew we needed to keep our cool today. We couldn’t let them get the best of us by putting us in the box, not letting us play five on five hockey … because anytime we were five on five, we could control the game.”

Swallowing the emotion of the first game and skating away from frequent opportunities to fight, the Flames focus provided them a 2-0 lead midway through the second period on a power-play goal from forward Lindsay LeBlanc and a solo goal from defenseman Danny Logan.

When Navy snuck in two of its own, tying it up early in the third period and looking to push the pace back to a frenzy, the Flames kept their heads and retaliated with a four-goal scoring spree. The Hannon, LeBlanc and Simon line contributed on three and forward Colt Steele netted another.

All in all, the Flames accrued just three penalties up to the final two minutes of play, proving, when all on the ice, they are the better of the
two teams.

“We were all preaching before the game and during intermission to stay disciplined,” LeBlanc said. “When you take 13 penalties like we did last night, you’re going to end up losing the game. It comes down to mentality. We stayed out of the box tonight and we won.”

The adjustment, however obvious it may seem, took character in the heat of a historically charged matchup. Handy expressed his pride in the team for their rebound.
“It’s nice to see our guys respond,” Handy said. “We wanted to modify the discipline aspect and they did. … The plays last night that we were retaliating on, we avoided tonight, and that was huge. Our team was patient all night, waiting for opportunities, and when it was there, they went for it.”

The Flames will look to bring that mindset to the ice next weekend against Ithaca College Friday and Saturday, Sept. 26 and 27, at 7 p.m. and 3 p.m., respectively.

RUSH is a sports reporter