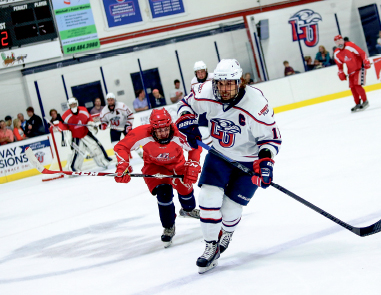 Division I hockey starts off the season with 7-2 rout

While the Liberty Flames men’s division I (DI) hockey team began a new season with nine new players and a new playbook Friday night, they posted a 7-2 win over the Potomac Patriots Junior A team in decidedly old fashion. It was captain Matt Sherry and alternate captain Lindsay LeBlanc, both seniors and veterans within the Flames hockey program, who set the tone for their team.

LeBlanc anchored the starting front line with freshmen Luke Hannon and Luke Simon, setting them up to score within the first five minutes of the game. LeBlanc went on to assist on three more goals, including one of Sherry’s two.

“It was our first game,” LeBlanc said. “We do have nine new guys, and so we have some things to work on. We’ve got a bunch of new systems this year, but overall we were happy. … All the boys battled hard, and that’s what we’re looking for.”

Sherry, who like LeBlanc, was paired with a first-year player in defenseman Peter Shantz, offered the Flames crucial stability in the neutral and defensive zones and timely scoring to boot. His first goal came in a hectic second period to put the Flames up 4-2, stall the Patriots scoring hopes and set up Liberty for a strong, three-goal third period.

“It was one of those nights where we expected to be working out some kinks,” Sherry said, echoing LeBlanc. “(It was our) first time playing an actual game. There’s a lot of new bodies out there, so it was just good to get the chemistry going. The first two periods we made a couple of mental errors in all aspects. … But the third period was a good one for us. That’s where we pulled away a little bit.”

Head Coach Kirk Handy agreed with his team leadership, noting that the Flames got stronger as the game progressed. He praised Sherry and LeBlanc for their solid play and example throughout. After all, the two returned more than just athleticism — they brought experience and the Flames traditional values to a new generation of the hockey program. “I guess after your fourth year, you kind of figure it out a bit,” Sherry said. “But the contributors really were from both the old guys and the new guys, so it was good and spread out along the lineup. (The freshmen) were great. They all have different roles on the ice, and I think they executed them well by the end there.”

Hannon and Simon had an immediate offensive impact with one goal and two assists apiece. Fundamental defenseman Ben Hughes found the back of the net. Shantz delivered staggering body checks, and faceoff specialist Grant Garvin won all but two off the drop throughout the game. The Flames freshmen lived up to their hype, but the consistent play and presence of Liberty’s respected returners grounded the team’s performance noticeably in its first outing of the year.

“Both of those guys have been solid for us over the years,” Handy said, “But tonight, LeBlanc, starting out, makes a pass to Hannon for the first (goal) of the game and plays a solid game all night and Sherry scoring timely goals. That’s huge, right? They had a great night for us tonight.”

With returning leadership guiding the way and the first win under their belts, the Flames look forward to progressing further. For all the newness of the hockey club, the ultimate goal is older than them all — one win at a time, right up to a national championship.

The Flames will hit the ice again at the LaHaye Ice Center Sept. 12 at 7 p.m. as they take on the Richmond Jr. A Team.