Basketball senior, Georgie Pacheco-Ortiz, is a leader on a team 1,500 miles from home 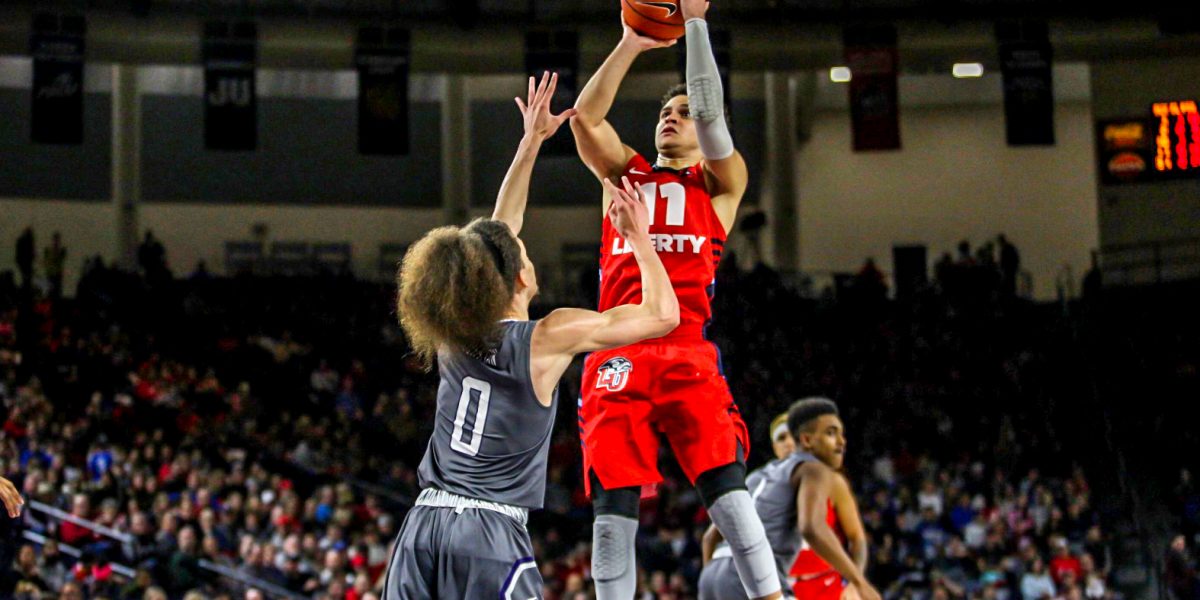 When asked whether it was harder to learn to speak English or to score 1,000 career points, senior guard Georgie Pacheco-Ortiz said it was more challenging to learn English.

“I came here to the States my sophomore year of high school without knowing any English, and it was hard for me to understand and speak another language I’d never spoken before,” Pacheco-Ortiz said. “I didn’t have anybody to speak Spanish with, and I just had to learn the hard way.”

Pacheco-Ortiz, who hails from Ponce, Puerto Rico, came to the United States his sophomore year of high school and attended Deep Run High School in Glen Allen, Virginia. His basketball career took off at Deep Run, where he scored 1,095 career points and picked up first team all-conference, all-region and all-state honors.

Pacheco-Ortiz also made a name for himself at home, playing in the FIBA Under-16, Under-17 and Under-18 basketball tournaments, where he helped his team to one fifth-place finish and two fourth-place finishes.

But he didn’t receive any DI basketball offers until late his senior year.

“My first and last DI offer was late in my senior year,” Pacheco-Ortiz said. “It came through Coach McKay and he believed in me since day one.”

Flames Head Coach Ritchie McKay said that though he initially misjudged Pacheco-Ortiz’s talent, Pacheco-Ortiz turned out to be an invaluable recruit.

“We actually had Georgie at our lead camp, and being the stellar evaluator that I am, I told his coach that he wasn’t good enough,” McKay said. “Well, we had lost 12 consecutive (games) and we were playing at VCU, and we practiced at Deep Run and we needed a point guard. So Georgie came back on the radar after we lost to VCU. After that, I went to see him at Benedictine and told his coach after the game that we wanted to give him a scholarship. And that decision was a blessing to our program because, obviously, he’s won a few games as a Liberty Flame.”

Pacheco-Ortiz found a family at Liberty, one he said he’s loved being a part of.

“I’ve been here for four years, and I spend a lot of time with the team,” Pacheco-Ortiz said. “They’re my brothers, they’re my family, they work on me, and they make it feel like home. I trust them, and I’m very open with them.”

Pacheco-Ortiz is known on the team and by his coaching staff not only for his humor, but also for his trustworthiness.

“He’s got a personality that attracts others,” McKay said. “We have a few guys like that, and they do it in their own individual gifting. Georgie’s hilarious. He’s the best imitator of me that we have in our program and that I’ve seen over the years. He can do a really good Ritchie McKay. And I think on the court he’s trustworthy – our guys just trust him. . . . He’s an individual that has enlisted trust amongst his teammates.”

And with the help and support of that family, Pacheco-Ortiz recently passed the 1,000-point mark in his college career and passed 2019 graduate Lovell Cabbil to become Liberty’s winningest player of all time.

“It’s a dream come true for me, being able to compete at the DI level,” Pacheco-Ortiz said. “I never thought I would score 1,000 points in my college career, and I feel good. I’m proud of myself – I came a long way, and now to be here is a blessing to me.”

Redshirt senior Scottie James, who has played with Pacheco-Ortiz since James transferred to Liberty in 2016, said it was great to see his teammate join the 1,000-point club.

“Georgie came off of the court, and I was sitting down and Caleb was sitting next to us and he said, ‘Welcome, welcome,’ kind of like a welcome-to-the-club type of thing,” James said. “So we were having some fun with it.”

But now Pacheco-Ortiz is facing one of the most difficult challenges of his career at Liberty, and it isn’t basketball-related. He’s working to stay focused and continue to produce even as his homeland Puerto Rico is rocked by daily aftershocks after Jan. 7’s Magnitude 6.4 earthquake.

Pacheco-Ortiz spends much of the year away from Ponce while he’s at Liberty, especially during basketball season, but he said the hardest part of the season has been being away from his family throughout the ordeal.

“It hurts not being there with my family and friends,” Pacheco-Ortiz said. “I’m glad that my family is okay, but it just hurts that other people lost their homes, and families don’t have a place to stay or sleep.”

According to McKay, Pacheco-Ortiz also isn’t the type to ask for much. But he has asked for prayer for his family and for his home country.

“Georgie’s a really special young man,” McKay said. “He’s very conscientious of what’s going on in his native country and he asked us to pray for him. He doesn’t ask anything – Georgie is, ‘What can I do for you?’ So I know it’s been a burden of his, and (Puerto Rico has) had a couple of natural disasters that are heartbreaks. . . . We stand with him, we support him, and I love that he will ask his brothers – his family – for something that he needs.”

Though Pacheco-Ortiz’s family has withstood the earthquakes, other families haven’t been so lucky. Thousands across Puerto Rico and his hometown of Ponce have been displaced because of structural damage or even collapse caused by the quakes and have to stay in shelters or AirBnBs until the aftershocks end when the officials can assess the damage to homes.

This isn’t the first time Pacheco-Ortiz has been away from his family during a disaster, either. He was also stateside when Hurricanes Maria and Irma lashed Puerto Rico in September 2017. The hurricanes killed more than 3,000, and Puerto Rico is still working to recover.

Pacheco-Ortiz said the one thing that anyone can do is pray, and he hopes Liberty can pitch in to help those who are affected.

“I have them in my prayers, and hopefully we as a university can help them to rebuild the area that was affected,” Pacheco-Ortiz said.