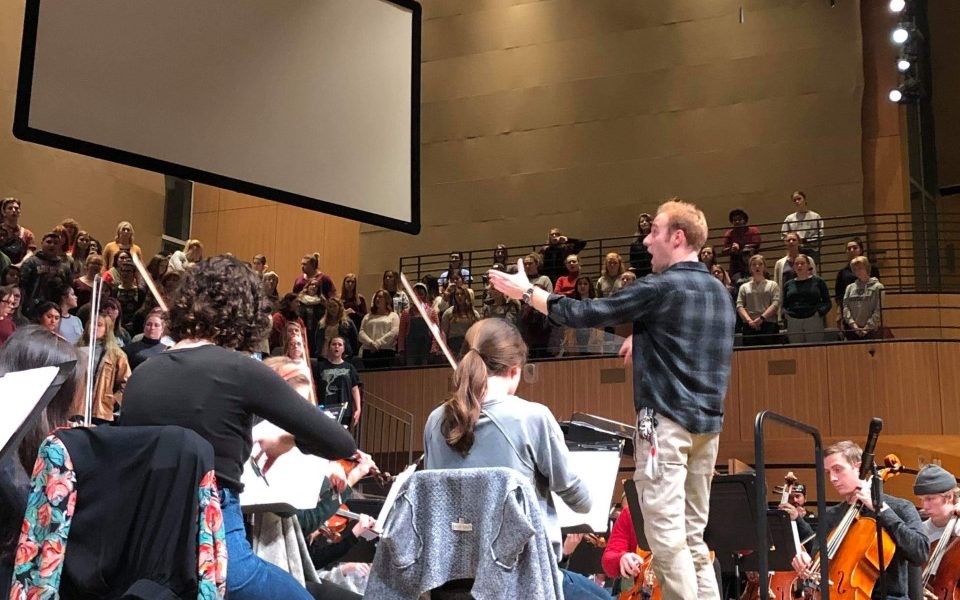 This year’s much-awaited “Christmas on the Boulevard” President’s Encore Performance will introduce a new, original musical piece inspired by a different galaxy.

The piece is influenced by soundtracks from John Williams and Hans Zimmer, but one film score in particular that heavily influenced the piece initially sparked Tome’s love for soundtracks.

“When I was six years old, my dad played the soundtrack to ‘The Phantom Menace’ in our Ford Explorer … and I was hooked when I heard the ‘Star Wars’ main theme,” Tomes said.

From that point on, Tomes fell in love with musical storytelling and knew he wanted to write music. He explored trailer music throughout middle school and high school and he will close out his career at Liberty with a live performance of his piece that was a year in the making.

Tomes had submitted the piece to be performed at “Christmas on the Boulevard” last year, but the piece still needed work. Brock Snow, a current graduate student who composed a version of “Carol of the Bells” that has been a highlight of the President’s Encore Performance, came on board to help Tomes perfect his work.

Originally, Tomes wrote the arrangement on the computer, but Snow was concerned that the piece would not translate clearly to a live performance. Tomes and Snow met every Saturday morning for a semester and a half to nail down orchestrations.

“(Tomes) already made the project, it was already there – I just stepped in and used my experience and abilities to help him bring it to the next level, realizing what he was imagining so it would sound that way in real life,” Snow said.

Tomes was determined to make his piece the best it could be, even if it meant changing the piece that he became attached to. Snow said that composing music is partially about the audience, and having that music performed live is “every composer’s dream.”

Snow has enjoyed watching Tomes hone his skills and display his hard work.

“When (Tomes) talks about it, he is just overwhelmed because it’s a dream come true,” Snow said. “And he keeps telling people that because that is the goal – the goal is to have your music performed for people … and to have it performed live with an ensemble of that size and being on the collegiate level, it means almost everything … after glorifying God with the piece, that is just everything else.”

Tomes is looking forward to the debut of a year’s worth of work when his passion for film scores will finish off the “Christmas on the Boulevard” performances at the President’s Encore Performance Dec. 6.

“It’s the greatest honor I’ve ever been given and the most humbling thing that’s ever happened to me because the entire School of Music at Liberty is putting their all into it and championing it and giving their best at it,” Tomes said. “I’m just extremely humbled and extremely grateful for the opportunity.”