Center for Music and Worship holds their annual concert 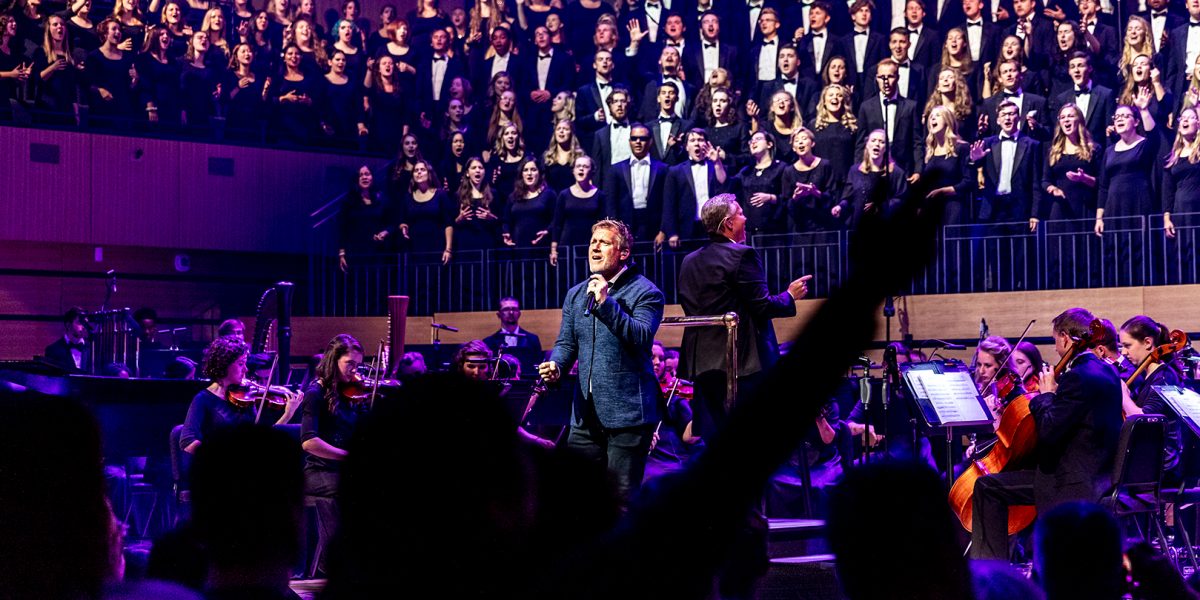 Homecoming weekend began Friday night with the wave of a baton as 500 choir members and instrumentalists from the Center for Music and the Worship Arts welcomed Liberty alumni back to campus with their annual concert.

Dr. Kathryn Wert began the concert accompanied by the Liberty University Symphony Orchestra playing “Barber of Seville Overture” before transitioning into the “Doxology,” after Dr. Vernon Whaley, dean of the School of Music, recognized alumni and invited all guests to stand and sing. Miller sang a song from the musical “Carousel,” bringing a Broadway-style song to the concert.

Whaley said that in preparing for this concert, he was “looking for things that alumni would be interested in and that are unique,” doing just that when he brought in Carrie and Taryn Harbridge.

The two sisters wrote an arrangement of “Jesus Loves Me (All My Days)” along with Hannah Lavigne who orchestrated the piece. With a music video of the girls in the background, Carrie and Taryn performed a powerful rendition of the well-known song for the audience to enjoy.

The second half of the concert focused on various arrangements of the Lord’s Prayer.

“Music has an emotional and aesthetic effect on us,” Associate Dean of the School of Music Dr. Stephen Muller said. “It can encourage and inspire us, especially when we focus on the Lord’s Prayer and have different arrangements of it. Jesus taught us to pray but the concept of prayer was for all people of all places.”

Emphasizing the universal nature of prayer, the show featured Bujambi, a student from Zimbabwe, who performed a solo during the song “Baba Yetu,” a rendition of the Lord’s Prayer sung in Swahili.

When asked which song impacted him the most personally, Connor Baldwin, a freshman in Worship Choir 1, immediately said “Baba Yetu.”

“While I didn’t necessarily know what I was singing, I knew the heart of the song” Baldwin said.

Billingsley and Schonfelder both sang versions of the Lord’s Prayer as well, with Billingsley closing out the night with an encore. The concert hall erupted in song as the entire audience stood to its feet, joining the choir and orchestra in singing,  “For thine is the kingdom and the power and the glory forever and
ever, amen.”

The Homecoming Concert was one of the many activities Liberty alumni attended throughout the homecoming weekend.