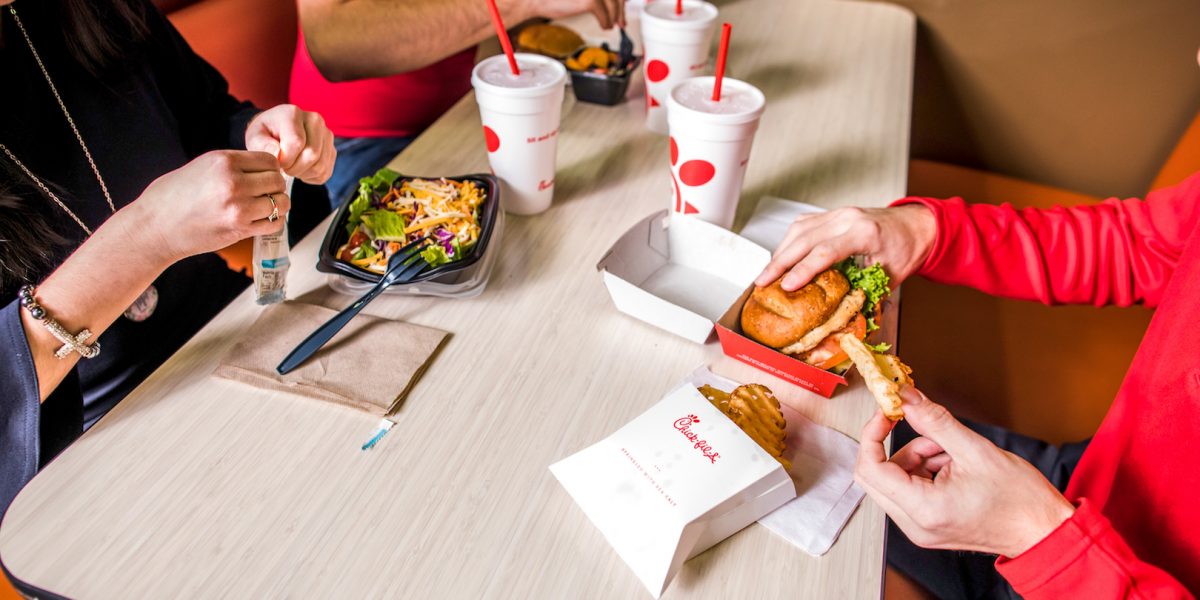 Meals on most other college campuses are often hated and viewed as wastes of money. Paying over $2,000 per semester for a communal pot of stew and room-temperature salad? No wonder so many students prefer to eat in their dorms.

With six dining plans to choose from, the school with the nation’s best dining services two years running (2015 and 2016) ensures that everyone, even students with gluten allergies, can eat from over 20 different dining locations on campus. Those options include Pizza Hut, Auntie Anne’s, Starbucks, Dunkin’ Donuts, Hey Cow!, Star Ginger, Einstein’s Bagels, Chick-fil-A and a diner – and that is not even including the main dining hall. With food from several different cultures, including Mediterranean and Asian, the sheer number of choices can be hard to digest.

The Freedom Dining plan is the basic plan. It gives the student unlimited access to Liberty’s main meal location, the Reber-Thomas Dining Hall, affectionately nicknamed “the Rot” by students. A student also receives 10 swipes, which allows the purchase of select items at a few dining locations on at Green Hall and East campus such as SubConnection and Doc’s Diner, respectively.

The Freedom Dining Plus plan is an upgrade from the basic plan. It also allows unlimited access to the Reber-Thomas Dining Hall, but  also gives 10 “plus swipes,” which can purchase more select items, to be used at all locations on campus, including every food outlet on North, East, and main campus.

Both plans come with $120 of “Dining Dollars” and $80 of “Flames Cash.” Dining Dollars are akin to gift cards, as a student can use them to purchase any food item at any meal outlet on campus. Flames Cash is not restricted to food – a student can pay for laundry, post office supplies, vending, items in the Liberty University Bookstore and even food at some select off-campus restaurants such as Buffalo Wild Wings and Chili’s.

A debate is waged every semester over which plan gives students more bang for their buck. Some students use Plus swipes every single day, while others think of the extra $200 per semester as money that could be saved for other things.

“There are a lot of food choices I want that aren’t swipes, and I would rather be able to get those than get more of the plus swipe stuff,” Emma Marr, a senior, said. “But then they got rid of some of the stuff I really liked, so now the Plus option is a better fit for me.”

Though more expensive, the Plus plan grew on her. She is now able to buy full entrees, such as a sandwich combo at Chick-fil-A or a pita meal at Garbanzo, without dipping into her Dining Dollars. She likes the Plus plan because it means she does not have to visit the Reber-Thomas Dining Hall as often as she would if she just had the basic plan.

“If you spend your swipes right, it’s very possible to never go to the (dining hall),” she said.

Plus swipes provide the opportunity to eat anywhere on campus, rather than just the dining hall. Eating any food, no matter how delicious, for an extended period of time will grow mundane. Plus swipes help keep options open for busy students.

If a student lives on main campus and it starts to rain or snow, he will be discouraged from trekking to the dining hall. However, if he can quickly get in and out of the Montview Student Union or library with a bag of burgers and fries, his life instantly becomes easier. He will not be limited to only eating at the dining hall on bustling workdays.

Convenience is king with the Freedom Dining Plus plan.

“It’s nice, especially at North, because there are a couple of days where I’m there all day, and it’s nice to definitely be able to get food anywhere,” Marr said. “I am able to get anything, anywhere with my plan.”

Some people wonder if the extra food is worth the convenience and variety.

For Danielle Lowder, the cheaper price is the best perk. Though it will come out of her Dining Dollars, she can still purchase any food items on campus – almost as if she used plus swipes.

By using the basic plan, a student saves $200 a semester, which adds up to $400 per year. If a student uses the plan for four years, he will save roughly $1,600. That sum can be used for tuition payments or purchasing textbooks.

“In the long run the saved money is definitely worth it,” Lowder said. “The stuff I would normally use plus swipes on – Chick-fil-A, Auntie Anne’s, et cetera – I just use Dining Dollars for and it’s no big deal.”

In all, one plan is not better than the other – it all depends on an individual’s food preferences and palette. If a student prefers home-style cooking, the basic plan might be the best way to go. If a student is accustomed to fast food, the Plus plan is probably the better option.

“It depends on how picky you are about food,” Marr said. “I would rather eat at other places on campus. If you’re perfectly fine with eating at the dining hall every day, (the Plus plan) is not really something you have to have. I mean, it’s nice to get Chick-fil-A every once in a while, but it depends on what your food preferences are.”