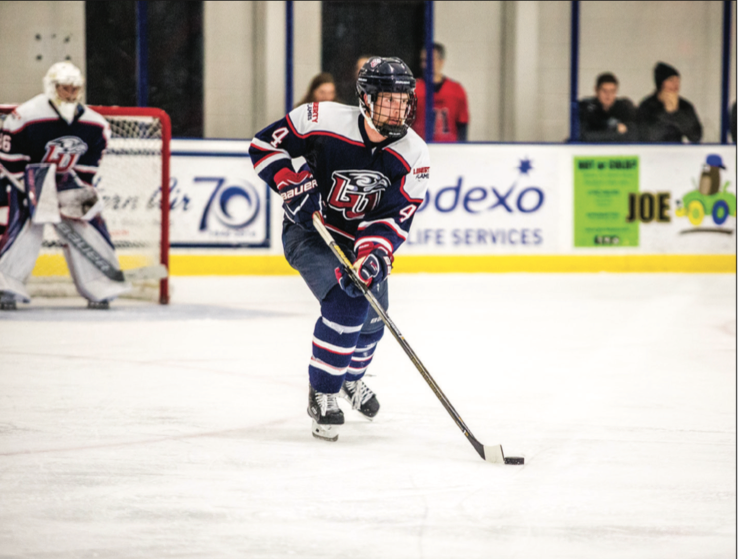 Within the first minute of the game, Bobcats forward Matt Rudin scored from the right face-off circle, giving Ohio an early lead.

Despite the power play advantage late in the first, the Flames could neither contain the Bobcats ferocious offense nor penetrate their strong defense.

“It was a good learning experience this weekend,” Liberty Head Coach Kirk Handy said. “When it comes down to it, it wasn’t about what Ohio did. It was about what we didn’t do.”

Handy said the Flames struggled to compete for the full 60 minutes.

Despite losing, the Flames were encouraged by the last 30 minutes of the game.

According to Handy, the team did a lot of things right within that time frame.

“We started out a little rough, but you don’t win the national championship in October,” Handy said. “It’s a process.”

With one minute left in the second period, Flames fans cheered as freshman defensemen Matt Cruickshank scored from the blue line, giving Liberty its first goal of the game.

“I did like the resilience of our team,” Liberty defensemen Ben Hughes said. “We definitely competed much better than our previous night.”

“The first thing that came to my mind when I came in was that I knew we needed a big shift,” Scott said. “I did what I could to make our team step up.”

According to Handy, the comradery between Pinel and Scott has made both players better goalkeepers.

“Blake (Scott) is a great goalie, and so is Matt (Pinel),” Handy said. “We put Blake (Scott) in, and it changed the course of the game.”

After Scott’s appearance, Ohio was scoreless until the last two minutes when Ohio forward Mike Palasics drove the puck past Scott to solidify the victory.

Handy said one of the biggest problems the Flames faced was starting off the game with a high intensity.

“To be honest, we didn’t have a great start,” Handy said. “(Ohio) scored within the first minute, which is something you never want to happen.”

Although they lost, Hughes said the defeat was something they have to learn from.

“(The loss) is always in the back of your mind, but we have to find a way to move on whether it’s in life, school, work or anything like that,” Hughes said.

The Flames will take on Stony Brook University in the LaHaye Ice Center Nov. 4-5. According to Hughes, it will be an important weekend for the team.

Handy said the Flames have been through rough games before and have experienced ugly losses due to poor play.

“I truly believe there’s something special in our locker room,” Handy said. “We just have to stay the course.”

Smith is a sports reporter.