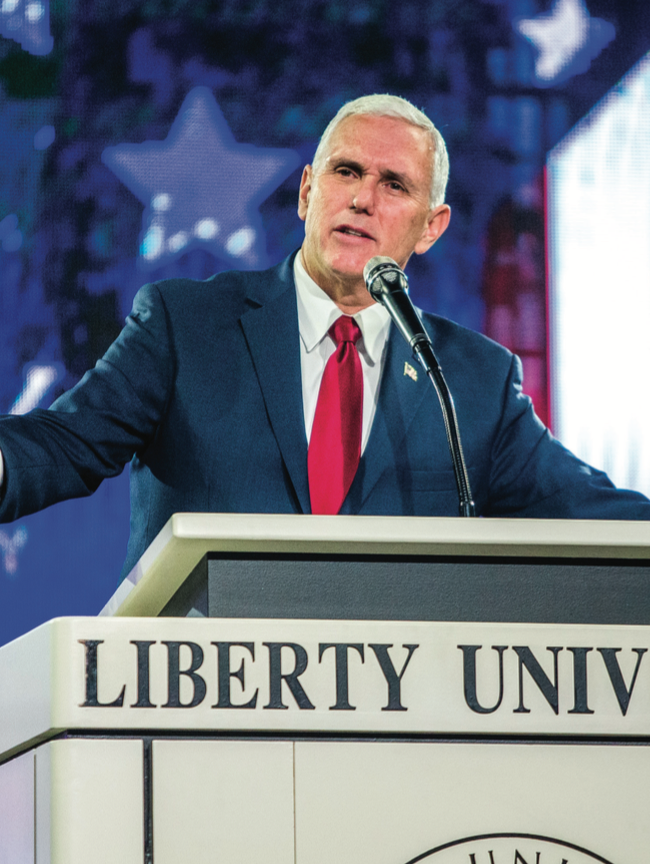 In front of a mostly conservative audience, Pence attempted to rally increased support for Donald Trump for president as he addressed the topics of Israel, abortions, the economy, healthcare and the necessity of Christians to use their voice in the Nov. 8 election.

Liberty president Jerry Falwell Jr. introduced Pence and said the two first met in person at the recent vice presidential debate at Longwood University. Falwell praised Pence’s governmental track record before the governor and his wife arrived on stage to a standing ovation.

GOVERNING THE FUTURE — Indiana Gov. Mike Pence (left) spoke to students at Liberty’s Convocation Oct. 12 on the future state of the nation and why evangelicals should vote Republican. Photo credit: Michela diddle

“I’m a Christian, conservative and a Republican in that order,” Pence said to the audience upon taking the stage.

Pence shared his Christian testimony by detailing the moment in which he first placed his faith in Jesus before transitioning into the story behind how he became running mates with Trump.

“I heard that familiar voice and he said, ‘Mike, it’s gonna be great,’” Pence said. “And it has been.”

Multiple times throughout Convocation, Pence praised Trump for his tough personality and commitment to improving America.

“He is a fighter,” Pence said. “He is a winner. And I believe come Nov. 8 that Donald Trump will be elected the 45th president of the United States, and we will make America great again.”

Pence said Trump embodies the spirit of America because he is strong, freedom-loving, independent, optimistic and willing to fight for what he believes in.

In light of the recent controversy regarding the lewd comments made by Trump in 2005, Pence praised Trump for his apology, saying it takes a big man to admit fault and apologize. Pence also reminded the audience of the fact that no one is perfect, urging them to forgive as they have been forgiven.

“As a believer we are called to live godly lives, but also we recognize that we all fall short,” Pence said. “It’s not about condoning what is said and done. It’s about believing in grace and forgiveness.”

Pence then appealed to Christians, urging them to not stay silent in the election. He said men and women of faith cannot stand idle in such a crucial moment
in the U.S.

After appealing to the Christians in the audience, Pence went on to why he believes the U.S. needs a new leader who will serve the people and bring the country back to prosperity.

He criticized Democratic presidential candidate Hillary Clinton for her campaign remarks that mocked Catholics and evangelicals.

Pence blamed President Barack Obama and Secretary of State Clinton’s foreign policy, which Pence said has “weakened America’s place in the world and emboldened the enemies of freedom.”

Alexis Rucker, a senior international relations student, said national security is one of the issues that caused her to place her support in the Trump-Pence campaign.

Rucker, who is a co-founder of the Liberty Trump Coalition, arrived at Convocation at 7:15 a.m. to see Pence speak because she said she was impressed by his performance in the vice presidential debate.

During his speech the audience applauded many times, but Pence’s mention of supporting Israel warranted a standing ovation and thunderous claps.

“I will promise you the day that Donald Trump and I assume the office of president and vice president, if the world knows nothing else, the world will know this — America stands with Israel,” Pence said.

Pence also proclaimed his allegiance to the pro-life cause, which also ignited and applause.

Though the seats were not completely full in the Vines Center, the applause filled the arena when Pence said he and Trump will work to make sure taxpayer dollars are not used to pay for abortions.

With an open seat in the Supreme Court, Pence encouraged the audience to make sure the next president who will appoint a justice to the court will uphold the Constitution and Americans’ God-given liberties.

Brady Snyder, a sophomore politics and policy student, said though he originally was anti-Hillary Clinton more than anything else, he admires Trump and Pence’s pro-life stance and commitment to protecting the second amendment.

Cameron Frye and his mother Marty Frye attended Convocation together because as Marty Frye said they came “to hear the next vice president.” 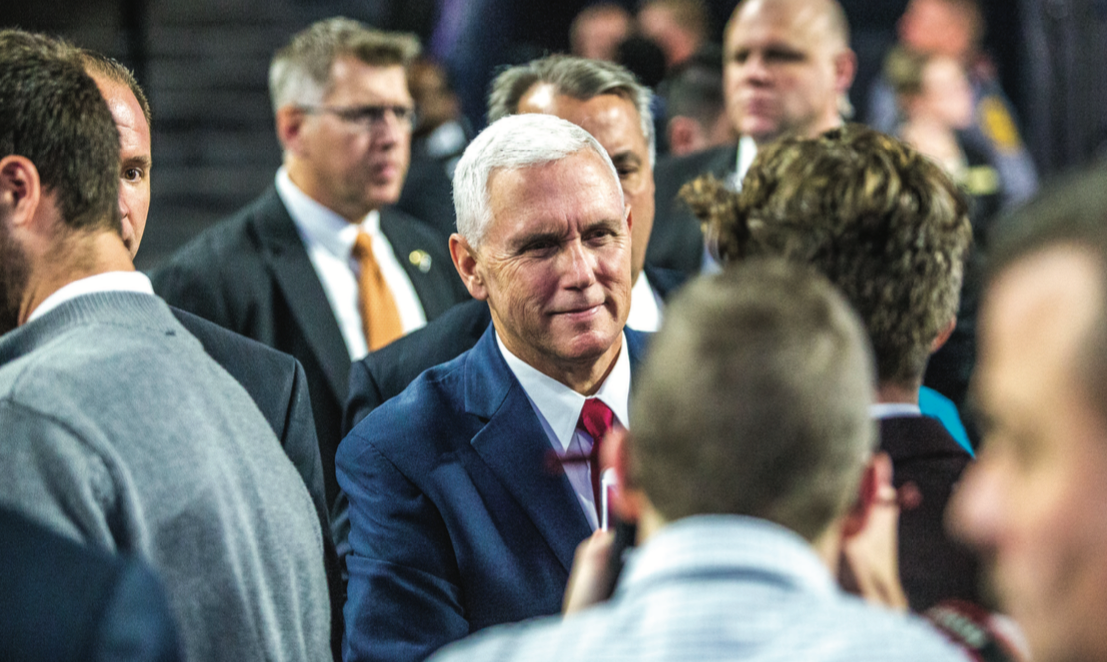 Cameron Frye, a senior business marketing and communications student, said after listening to Pence’s speech that he is ready for someone to change the state of the country, and he thinks Trump fits the bill.

“(I am) tired and annoyed by the way that things are going currently,” Cameron Frye said. “Hillary Clinton is just going to be an extension of that, and we need something different.”

“Mike Pence really did a good job of keeping track of the issues that are at stake in our election,” Pence said.

“It was good to remind people that it is not really a lesser of two evils. You’ve got one person who is very vulgar, but then you’ve got another person who has had many many years of supposed experience running a country, and she’s not done anything of any note. If anything she’s harmed our country more.”

Pence concluded his address with a challenge to the audience members. He asked the college students to take ownership of their future and not stand idly by on election day.

“This election is a choice of whether we’re going to continue to go downhill to a weaker America at home and abroad, to a struggling American economy that walks further away from our most cherished constitutional principles and ideas or whether we are going to stop and plant our feet and march back up the hill to a stronger America, a freer America, a more prosperous America built on the foundation of our constitutional principles,” Pence said. “That’s the choice.”