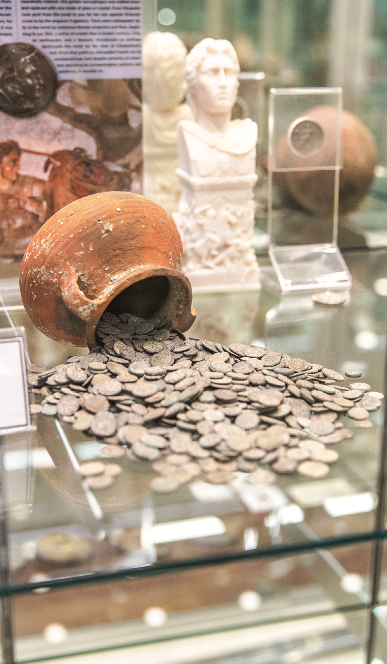 Fossils and historical artifacts on display

In just a few minutes’ time, visitors at the Liberty Biblical Museum can travel from the great flood all the way through the Byzantine period, exploring artifacts from eras of Jewish and New Testament history that bring the Bible to life.

Almost all of the artifacts and replicas are owned by Dr. J. Randall Price, distinguished research professor and museum curator at Liberty University.

He said the purpose of the museum is to help visitors understand that the Bible has a reliable history to it and that it is a “faith based on facts.”

“If we just have a storybook faith, if we just get principles, and it’s good for guiding our life and sounds good, then … I can take it or leave it,” Price said.

“But if we have a real faith, based in a real world and real history, we can’t shake the fact that God actually stepped into time to prove himself to us.”

The layout of the museum, located on the bottom floor of the Jerry Falwell Library at Liberty, is a timeline that guides visitors from fossil evidence of the global flood to teaching how the Bible was copied and translated into its modern form today.

The global flood cases feature a replica of the Gilgamesh Epic, which documents the Sumerian version of a global flood, and dinosaur eggs from China.

The Bronze Age shelves contain mud bricks from Egypt — the type used by the Israelites when they were enslaved by the Egyptians.

The Late Bronze period exhibit houses a stone from the fallen city of Jericho, and elsewhere in the museum is an Egyptian sickle sword.

“Everyone knows the story of Joshua conquering Jericho, and you can come here and see an actual sword from the time of Joshua that he would have used to conquer Jericho,” Price said.

He said almost everything in the museum comes from antiquity stores, ex-museum collections, private collections and auctions. One exception is replicas of the Dead Sea Scrolls.

The story of their discovery is supposedly that a young sheperd boy threw a rock into a cave, and it hit what turned out to be the pots containing the scrolls.

“The Dead Sea Scrolls are a collection of a community that lived and interacted with (the people of Jesus’ time) too, so it’s a lot of things in the sectarian documents of the Dead Sea Scrolls that parallel the New Testament and its history and terminology,” Price said.

The “Temple and Priesthood” exhibit contains an actual piece of the Second Temple that was the center of Jewish life in Jesus’ time and was destroyed in the siege of Jerusalem by Titus in 70 A.D.

Price, who worked as an archaeologist in Israel and has been collecting the pieces for 40 years, said the museum’s current state is just the beginning and that his hope is that Liberty will acquire it sometime in the future.

“Dr. Falwell hired me and asked me to bring this collection here,” Price said. “Then Jerry (Falwell) Jr. said it’s a good thing. So I provide the artifacts and Liberty provides the space, so it’s a partnership at this point. … If they do (acquire it), it can be expanded.”

CLARKE is the managing editor