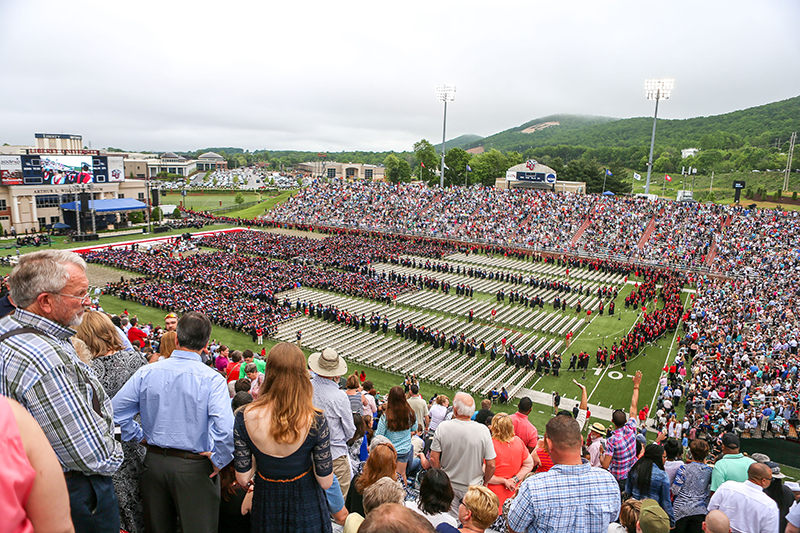 President Jerry Falwell Jr.’s voice rang out through the loudspeakers Saturday morning, May 9, as he announced the approximate number of degrees to be awarded at Liberty University’s 42nd Commencement Ceremony: 17,500.

This amount of graduates brought in hundreds of thousands of family and friends into the football stadium, and after O.S. Hawkins opened the ceremony, Falwell addressed the class of 2015.

“Never forget the original vision for Liberty,” Falwell said. “ … Your priorities should be to love God and love others while you strive to be the best you can be in your chosen profession.” 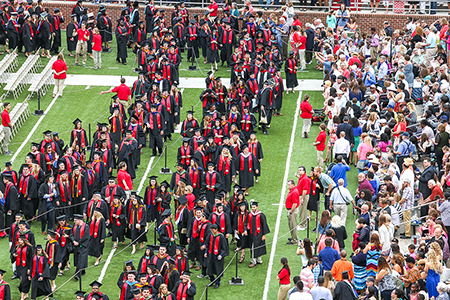 In addition, Falwell highlighted several graduates that represent the class of 2015. He also mentioned the “ring by spring” concept, which is so popular on campus that it was mentioned on a Jimmy Fallon Tonight Show segment. He continued on that theme, saying that he met his wife Becki at Liberty and he had others who met their spouses at Liberty stand and be recognized. Falwell ended this segment by introducing graduating senior Laura Brumble and asking her to stand. Next, he introduced his son, Wesley Falwell, who then kneeled down and proposed to Brumble. She said “yes” in front of the crowded stadium.

After Falwell left the graduates with words of encouragement, he introduced Jeb Bush, the former governor of Florida, to give the keynote address to the graduates. While some anticipated that Bush would announce his bid for the presidency at Liberty, Bush touched on political issues but ultimately focused on the graduates.

“Today, by the thousands, Liberty is sending forth across America civilized, confident, true-hearted men and women which just happens to be what America needs today,” Bush said. He noted that Liberty graduates are providing “a Christian conscience in action.” 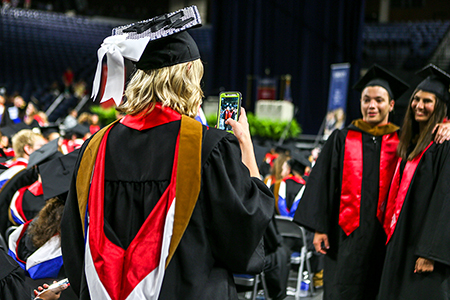 Photos — Graduates take pictures with one another to remember the occasion. Leah Seavers

That “conscience in action” received a boost with Saturday’s graduating class of 2015, which included more than 7,700 master’s degrees, 550 doctorate degrees, 4,800 honors graduates, 5400 grads associated with the military, more than 1,000 graduating with a precise 4.0 grade point average, and seven posthumous graduates, according to Falwell.

Following the major service, graduates dispersed to their respective award ceremonies. Dave Van Dyk received his Bachelor of Science degree in communication studies with a focus in journalism. Van Dyk enjoyed the service and reflected on his time at Liberty and on how much more it meant because of his work with the staff at the Liberty Champion.

“The people make the experience,” Van Dyk said. “It’s not really the job or what you do, although that can be fun, … (but) if you’re with great people that you really appreciate and enjoy, that can really be the best part of it.”

Another graduate, Hannah Solem, left Liberty with two Bachelor of Science degrees in interdisciplinary studies with and concentration in communication studies and family and consumer sciences. Solem wanted to leave her fellow graduates and students with advice not only for schooling but for life. 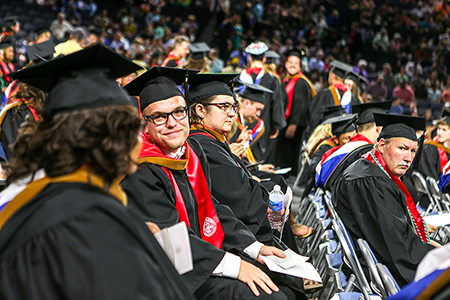 Class of 2015 — President Jerry Falwell Jr. announced that Liberty would award roughly 17,500 degrees to the class of 2015. Leah Seavers

“Go and impact this generation,” Solem said. “Do what you do, (and) do it really well. … Let’s be world changers, having … confidence in Christ.”

As graduates were individually presented certificates throughout the day in the different departments, Solem’s message was also reiterated to the class of 2015, and Jerry Falwell Jr left the graduates with this.

“It is you, (the class of 2015) that makes Liberty University successful,” Jerry Falwell Jr. said. “It is you that represents this university so well with your work ethic and service to those in need. And it is your obvious love for God and love for others in the workplace that sets this university apart. The vast majority of you will never preach a sermon, but our goal at LU has been to train you to live a sermon everyday.”