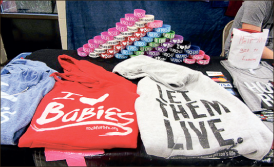 Liberty University Student Government Association Senior Class President Chelsea Patterson directed a Pro-Life Emphasis Week April 17-19 to inform students about pro-life issues and encourage them to get involved any way they can. “I think it is a Christian’s duty to fight for the lives of the innocent and fight against injustice,” Patterson said. “I believe that abortion is the greatest injustice of our time because it brutally ends a life. The reason I chose to plan a Pro-Life Emphasis Week, even though it is a controversial topic, is to inspire the student body and equip them on how to be pro-life in the world.”

According to Patterson, students had the opportunity to hear from a variety of speakers throughout the week, including Mike Spencer and Thomas Donovan from the Life Training Institute ministry, as well as Phil Kline, the former attorney general of Kansas.

In addition to attending various lectures, students met with different pro-life organizations from around the country. The entire student body also received a preset email in which they could encourage their home states’ congressmen and senators to stand up for the pro-life movement.

Although this is the first year a Pro-Life Emphasis Week has been hosted at Liberty, Patterson said that she would like to see it become an annual event. In 2009, then Student Body President Matt Mihelic organized a pro-life-focused Convocation and started the ROSE Initiative, which stands for Reclaiming our Sacred Existence.

“I thought it would be beneficial to have a longer time focusing on the issue of pro-life so that students could attend different lectures, such as Abortion and Apologetics and Abortion and the Law, et cetera,” Patterson said.

As a testament to their support of pro-life, Friday, April 19, students wore either a red or white shirt to Convocation to represent the number of babies aborted each year in the U.S.

Liberty senior Jill Diblin posted a photo of the Convocation on Instagram with the caption, “Today, one-third of our student body wore red to represent the babies that were never given the opportunity of life because of abortion. We are not OK with the babies that were murdered, and we will stand up for their rights as human beings.”

Sophomore Lindsey Eggeman also posted a photo of the student body on Instagram, with the caption, “Let them live, #endabortion.”

“This week is beneficial for two reasons: first, it allows a greater number of people to become more aware of the issue of abortion, and life in general,” Liberty student Greg Belise said. “Second, it forces those people to question their own views, thinking about how they personally view life. Simply put, the future of our nation rests in the students of our universities, and knowledge about pro-life is vital for them.”

Belise went on to describe the religious implications of the abortion debate.

“Even though the issue of life is a scientific and philosophical issue, it is also a religious one,” Belise said. “There is never any danger in learning further the importance of life, because ultimately it is an issue close to God’s heart.”

Students can join a pro-life club on campus called LifeLine in order to become more involved. Patterson designed the Pro-Life Emphasis Week to help students gain more knowledge about the topic so that they can share what they have learned with others.

“I hope that students will gain a greater awareness on the topic and gain a passion for saving the lives of the unborn,” Patterson said. “If there are any who have personally been affected by abortion, whether they’ve had one themselves, or know someone that has, I hope that they will know that there is forgiveness and hope for them, and that they can use their story for the glory of God.”

For more information about LifeLine, email Sean Maguire at LSL@liberty.edu.