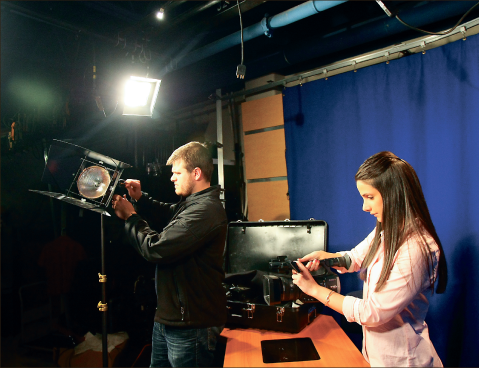 What happens in Vegas may stay in Vegas, but a select few broadcasting students from Liberty University are hoping to gain valuable job experience from their experience out West April 6-11.

Atkins, Aube and 49 other students from universities across the country are spending three days learning about the newest Sony broadcasting technology from Sony representatives before demonstrating the equipment to people who visit Sony’s booth during the massive NAB conference. According to nabshow.com, more than 90,000 media professionals from 150 countries and 1,500 companies will be in attendance.

“If you think about it, out of all the colleges in the whole country, they pick like 17, and then the students from them,” Aube said. “Matt and I got chosen, so I feel like it’s kind of a big deal and a big privilege.”

According to Pamela Miller, an associate professor of digital media and the Liberty director of student programming, schools are chosen and allotted a varying number of students to participate in the all-expense-paid trip. This is the first year that Liberty took part in the program.

Miller said that a representative from Sony visited Liberty’s campus during the university’s conversion from standard definition to high definition equipment. While on campus, the representative heard about the department’s vision of educating students in a hands-on way and asked Dean Norman Mintle of the Communications Studies Department and Miller if he could nominate Liberty to participate in the program.

“With the new film school, our equipment is top-of-the-line and is getting up to the level of schools that are just dedicated to film schools,” Atkins said. “I think Liberty’s working toward that and changing their classes to make them more hands-on and applicable so that you can use those skills.”

The students participating in the program range from graduate digital media students to undergraduate digital media students, such as Aube and Atkins. The two had the chance to interact through Facebook with students from other schools who are participating in the program, but both said that they also look forward to sharing experiences in person as well as networking for the future.

“I love talking to people anyway, and that’s the best way to network, to get along with people, talk and have good conversations,” Atkins said. “I mean, I’d be lying if I said I wasn’t trying to maybe get my name into some places, but I don’t think it’s my sole purpose. I think one of the things I’m most looking forward to for the program itself is just learning new technology.”

According to Miller, being able to network and build relationships is very important for people in the digital media field.

“From a business point of view, our business is all about networking,” Miller said. “So, this is a great opportunity, and that’s why we hope to have more Liberty kids going.”

Aube has done on-camera work with the “90 Seconds Around Liberty” broadcast in previous semesters, and she currently works as the office manager of the radio station on campus, 90.9 The Light. Atkins works in the digital media lab and especially enjoys working on live broadcasts.

Neither Aube nor Atkins had been to Las Vegas before leaving for the conference. Atkins is no stranger to travel — his parents are missionaries to Romania, and he grew up in the Ukraine. However, Aube said that she has never traveled outside of the Eastern Standard Time Zone.

According to Miller, people in the Liberty Communications Studies Department hope that Aube and Atkins will act as a stepping stone leading the way for future Liberty students to attend the conference.

“This year, Liberty gets to send two,” Miller said. “We are counting on the fact that we stay in the mix and get to send more every year, so it’s quite an honor to be the first ones to go, as well as it’s an honor for Liberty.”

After Aube and Atkins return from their trip, Miller said that she expects the knowledge they gain will be significant.