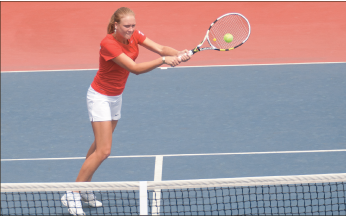 “Marshall is a team that has competed with the top 30 teams in the country and been within points of beating them,” Head Coach Jeff Maren said. “They’re legit. They’re a very good team, so, for us to play a match like this, it was very beneficial.” All is love— Alexandera Sheeran has a 2-1 conference record in singles play. Photo credit: Ruth Bibby

With the loss, Liberty falls to 10-8 (6-2 Big South). The Lady Flames have two games remaining, one against Big South opponent Charleston Southern and another against non-conference opponent Richmond.

“Every match that Coach Maren has prepared for us, it’s to prepare us for the Big South (Championship). We are playing difficult teams, but that’s for a purpose. We don’t want to play lower teams … to give us a false confidence,” Valerie Thong said.

Liberty did secure one victory in the doubles portion of the match as Liberty’s No. 3 duo of Cameron Richard and Thong defeated Marshall’s team of Dana Oppinger and Kai Broomfield, 8-4.

“Today, I felt we really hung in there, and every single game, there are so many points you don’t see that don’t go on the scoreboard,” Jenkins said.

The Lady Flames lost every singles match with the exception of one. The lone victory came from Thong, who defeated Marshall’s Broomfield, (6-2, 6-0). Thong is currently riding a five-match winning streak. Jenkins and Richard each took their matches to extra sets, but ultimately lost (6-3, 6-1, 6-4) and (6-4, 4-6, 6-1), respectively.

“The whole thing is we have to see it from not an emotional perspective,” Jenkins said. “This is another match bringing us to our goal.”

Marshall’s No. 3-6 players won their matches in straight sets. The point to seal the victory for Marshall stemmed from No. 6 Kucin besting Liberty’s No. 6 Annisha Domenech (6-3, 6-0).

The Lady Flames have two games remaining on their schedule, which will condition them for a postseason run for the Big South Championship. The Big South Tournament is scheduled for April 17.