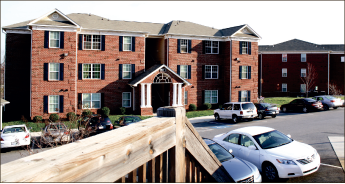 Growth and renovation have continued to shape Liberty University as its staff and students celebrate the 40th anniversary of its creation. Along with numerous upgrades in academic and athletic buildings around campus, Liberty’s Campus East resident buildings will be given a new numbering system in the fall of 2011 that will improve campus directions and make way for future expansion. Forty years of growth – Campus East resident buildings will all have new numbers in the fall of 2011. The change will eliminate duplicate dorm numbers. Photo credit: Laura Foster

“This (change) is a couple of different projects rolled into one,” Director of Financial Research Richard Martin said. “The resident hall numbers and even some of the building numbers that related with other facilities had to change.”

This change is part of a larger effort to create easier navigation in emergency situations, according to Martin, who worked with LUPD and the City of Lynchburg to develop this new system.

Many times in the past students have called for help and have been unclear of their whereabouts, according to LUPD Chief of Police Col. Richard Hinkley. This causes difficulty for emergency personnel who are sent to help.

“If they say ‘I’m in dorm 22’ and hang up before we can ask which one, we have a problem,” Hinkley said.

In times when emergency crews have been brought to campus to aid in an incident, Hinkley said that they could not find their way to the site on their own.

“As soon as the fire department or other emergency vehicles come on campus, they are being led by an LUPD car or security car to help them get to that point,” Hinkley said. “As the university grows, there will come a time when we won’t be able to do that. We’ll just need them to get there.”

The current Campus East numbers, E01 to E41, will soon become dorm numbers E41 to E94. This change will eliminate the chance of confusion between Main and East Campus dorms that have the same building number. Dorms located on Tunnel Court will be labelled E90 through E94. Those on City View Lane will be given numbers E72 through E85, Towns Court dorms will be numbers E70 and E71, and East Campus Drive dorms will run from E41 to E54.

“We wanted the block of numbers to correspond with a turn and we wanted the numbers to have the lower numbers to be at the northern side of campus and to get larger as you move south,” Martin said.

“That’s something that is done in cities as well,” Hinkley said. “Everything is run from north to south,”

Numbers E60 to 69 have been reserved for dorms yet to be built behind the Wingate hotel, towards Liberty’s Snowflex.

Though dorm numbers could have been changed on main campus as well, Hinkley said that they tried to honor the tradition of those dorms by keeping them the same.

“It would be least painful to change the East numbers and leave alone dorms like dorm 8 on the Circle,” Hinkley said.

Prior to this year, many of the roads on campus either remained nameless or had names which duplicated other Lynchburg roads. Thanks to LUPD’s work in the fall semester of 2010, Liberty’s Campus East now dons the road names Tunnel Court, City View Lane, Towns Court and East Campus Drive, which will soon be implemented into the physical addresses of student resident halls.

The hope for these changes is to make the layout make sense from the perspective of a city planner, according to Hinkley and Martin.

“(Up to this point) we only had a handful of usable address points that could be used to notify people outside of LU to know where to go, for example, on main campus, the entire main campus’ address is 1971 University Blvd.,” Martin said. “If you went onto Google maps, that would bring you to somewhere near (the Barnes and Noble Bookstore.)”

As the campus continues to grow, Martin and Hinkley see a campus-wide physical address as a large detriment.

“The (universal) address becomes less and less useful over time,” Martin said. “(On the other hand) if dispatch were to receive a specific address, there would be no need for an additional explanation.”

The dorm numbers will not change until after graduation in May. Signs will then be posted to direct campus residents.

When registering for housing for the fall semester, the renumbering and dorm addresses will be listed alongside the current numbering system to minimize any possible confusion.

A map of Liberty University’s housing and road changes can be found under Department Services GIS at lynchburgva.gov.