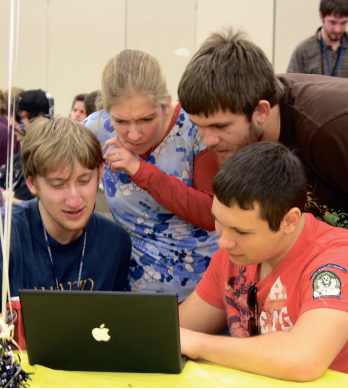 Great times and fun memories — Thirty-two teams, comprised of four students each, scattered across Lynchburg on Saturday in search of various checkpoints where they could find a Student Activities representative, or take a picture with their team. Photo credit: Laura Foster

The second annual Hill City Scavenger Hunt was about to begin Saturday, Jan. 29, and students chatted excitedly as they awaited their turn at the registration table. The hunt, which was created and coordinated by Student Activities, was a city-wide scavenger hunt with 20 challenges which combined the use of Facebook, Twitter and texting.

“We are striving to make people happy and provide an experience that is unforgettable,” Student Activities Associate Director Alese Chandler said.

It was that unforgettable experience that drew many participants to come back for a second time after participating in the first scavenger hunt in January 2010.

“We did it last year, and we wanted to do it again,” junior Pilar Figliola said. “It was a lot of fun, running around Lynchburg and acting crazy.”

“We have some new strategies,” teammate junior Marissa Jacobs said. “We have a map this year.”

The group laughed together.

“We didn’t have one last year,” Jacobs said.

That group was one of 32 teams, or 136 students, that participated.

The Hill City Hunt included 11 location challenges, where students were required to check-in with a Student Activities representative.

The other nine challenges were picture challenges, where three of the group members on a team were required to be in a picture at specified location, holding their team’s sign.

According to Student Activities staff member, Jordan Harvey, once the pictures are taken, they must be uploaded to the Student Activities Facebook page. The greater number of challenges completed, the more points are added to the team’s score, making them more likely to win.

“A lot of businesses are giving away gift cards or free meals for the first team,” Student Activities employee Parker Comfort said. “This is the kind of event that businesses love. They’ll have at least 100 students stopping by their location.”

Music echoed with the sounds of laughing and conversation as the teams awaited their cue to start.

“We like to have adventures with each other,” sophomore Amber Middleton said. “If it has anything with adventure and prizes, we are pretty much sold on the idea.”

The group came together as friends who had lived on the same hall last year.

“We go on adventures together a lot, so we’re pretty good (with navigating the Lynchburg area),” sophomore Brandie Bishop said. “We are expecting great times and funny memories.”

Upon return, students sat and mused over their journey.

“It was pretty stressful,” Middleton said. “But it was great.”

Middleton also remarked that driving was taxing, as they were honked at by other drivers.

At the end of the event, Student Activities raffled off a Nintendo Wii gaming system, which could be won by any participant in the hunt.