Leaving a legacy on the field 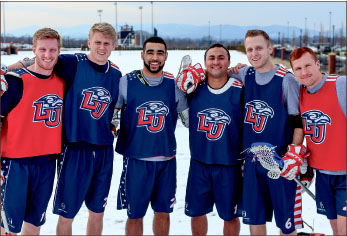 The Liberty University Men’s Lacrosse program has achieved unprecedented athletic success in its brief existence. As members of the team since its 2010 inception, they have experienced every bit of its four years, three seasons, one conference championship and a swift rise to Division I (DI) of the Men’s Collegiate Lacrosse Association (MCLA) firsthand. The six remaining originals, living parts of the program’s unique history value the milestones all the more.

Liberty’s history with lacrosse precedes its instatement as an official club sport. A thriving student-run program existed on campus until 2005, when the team was involved in a horrific car crash that left half the roster with extensive injuries.

The remaining players, including junior team captain and president Kyle McQuillan, managed to hold their shattered team together to complete the season. Afterwards, the program struggled along until it eventually dissolved and the players scattered.

By the time the club sports department was created in 2007 with Director of Campus Recreation Kirk Handy at its head, McQuillan had taken a job with the school working in finance — lacrosse relegated to the past.

Fast forward two years. Zumpano arrived as a prospective student on a campus visit, making a beeline for Handy’s office.

The Connecticut native was introduced to the game of lacrosse his freshman year of high school. Four years later, determined that his college experience would include his favorite sport, Zumpano met with Handy to discuss the possibility of starting a lacrosse program from scratch. With a deadline by which to have players and a league organized, Zampano and a handful of others pieced together a roster — an unlikely group of athletes with a shared goal. They researched potential leagues in which to play and held practices. South campus was home to regular games, participants running the length of the recreation fields and shooting on a softball net.

By spring of 2010, all club sports needed from the players to launch the program was a coach.

After receiving a tip from those involved with the past team, Handy reached out to McQuillan and explained the situation. McQuillan was surprised, but jumped into the fray without a second thought.

“I’d never coached before, so I didn’t have a whole lot of experience,” McQuillan said. “But what I told them was, ‘Look. You’ll never find anybody who cares more about this program and this school who has the history I feel like I have with it.’”

That, along with McQuillan’s administrative skills and knowledge of the South Eastern Lacrosse Conference (SELC) of the MCLA, was enough for Handy. Club sports hired McQuillan and announced the official start of a club team that fall, just in time for the arrival of freshmen Sipe, Tobias, Briggs, Haywood and Lozada.

All five shared similar lacrosse histories, picking it up as an offseason sport at the urging of friends, coaches and, in Tobias’ case, an older sister who played the sport and lined her little brother up in goal for frequent target practice.

Other than Tobias and Briggs, who attended rival high schools in Northern Virginia, none knew each other or Zumpano. Most had no idea of the team’s revival until the semester was already underway.

Through word of mouth, they learned that Liberty was bringing back lacrosse and showed up for tryouts. When the final roster was released, all six of their names were on it.

“(That first season) was rough,” Haywood said. “We didn’t have a practice field, so we were on south campus inbetween dorms, always having to chase stray balls in the middle of practice, running through cars and stuff. … It was a learning curve for all of us, coach included.”

Sipe said the team was forced to move around a lot that first year, and Lozada reminisced about a time they were forced to move near the softball field.

With inconvenience and inexperience working against them, the Flames shifted their sights.

“Just staying together as a team that first year was our main focus,” Zumpano said. “We set goals as a team and as individuals, and we just tried to build a foundation for what we wanted to come.”

The attitude check worked in their favor. The team went 4-4.

“It was a big deal, considering we just kind of threw a team together and managed to win some games that we weren’t supposed to win,” Sipe said.

More importantly, they ended the season with their greater goals intact.

“When I look back at that first year, I think of it as being just as successful as the last two, because we established ourselves,” McQuillan said.

Liberty further contributed to that stability with the construction of state-of-the-art facilities for the team. “That in and of itself was one of the biggest boosters for us,” Zumpano said. “They gave us a field and a locker room to be in.”

Without logistical mix-ups to worry about, the Flames could focus their attention fully on the field. They put up an 8-4 overall record in their second season, falling in the playoffs to eventual SELC champion Elon.

Just one year later, it was Zumpano hoisting the SELC championship trophy in celebration with his teammates, McQuillan receiving a customary Gatorade dousing after sweeping the playoffs. Their 18-2 season only ended in a nail-biting, Final Four overtime loss to eventual MCLA Division II champion University of St. Thomas.

“What we did last year… is something I dreamed about doing as a player but was never able to accomplish,” McQuillan said. “To be able to come back and do that as a coach meant a lot to me.”

It also made possible the realization of another dream McQuillan had harbored since his playing days — moving up to DI of the SELC. The team received official approval in 2013, and while the players are excited to step up, they are not daunted.

After all, the six have lived every step of the rapid rise of Flames lacrosse — they see no reason the rate should slow now. The six share high expectation for this season and NCAA dreams for the future.

“It’s kind of come full circle,” Zumpano said. “We were there through the growth phase, we think it’s a promising future in DI and ultimately, to be able to look back and remember those days, where this thing was, having that perspective is huge and helps us cast a much better vision for where we want to go.”

Wherever that vision is, the six know this season is their last to take the field. Their feelings are mixed, but all agreed on one point — they are proud of their role in Liberty
lacrosse.

“We definitely have a bond, the guys who have been here since the beginning,” Sipe said. “And while it’s cool now, I think in five or 10 years, we’re going to appreciate it even more. When we come back and the program is really big, we can say we were the ones that helped start it.”

From humble but passionate beginnings to an SELC championship, they are accustomed to the extraordinary. In their final season together, the six aim to finish what they started in historic fashion.