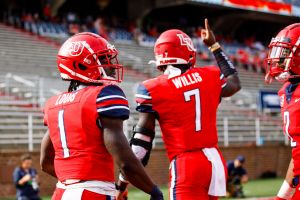 “I just told our team at midfield that I don’t know that I would have believed it [being 6-0] if you would’ve told me we’d be sitting here at 6-0,” said Head Coach Hugh Freeze.

Willis was shocked to know his statline after the game, but grateful just the same.

“For real? I did not even know it was like that,” Willis said, “God came out there and blessed us with our sixth win.”

Willis responded to Southern Miss scoring on its’ first possession by going 65 yards in only three plays culminating in a 39 yard beauty to Kevin Shaa. The Flames were off and running as Willis threw four more touchdowns to Demario Douglas, Kevin Shaa (Again), Chris Barrett, and Johnny Huntley. The drives made for 35 unanswered points as Liberty lead 35-7 at the half.

“He [Malik Willis] played really well outside of four or five plays,” said Coach Freeze, “obviously quarterbacks, when they make mistakes it is glaring, but when they do really well it’s glaring too.”

The Golden Eagles refused to give up, however. Despite starting Quarterback Jack Abraham not traveling with the team, they still put up a fight to Liberty in the second half. After forcing a Malik Willis fumble at the start of the third quarter, Southern Miss scored 21 unanswered to pull within 35-28.

Tate Whatley started in place of Jack Abraham for Southern Miss and did a serviceable job filling in in his first start since 2018. Whatley went 15-26 for 188 yards and one touchdown to go along with three rushing touchdowns.

“Six has played a lot,” said Coach Freeze, “We knew he could throw it too, and run, he probably runs it better than Jack.”

After Southern Miss had life, Malik Willis took control of the game back towards the end of the third quarter. Willis had another 42 yard touchdown pass to C.J. Daniels and a 38 yard touchdown run to cap off arguably the greatest day a Flames quarterback has ever had.

“Really proud of the way Malik bounced back from that,” said Coach Freeze.

The Flames will enjoy being 6-0 for an extra week with no game next weekend. However, they will travel to Blacksburg to face off against Virginia Tech. The Flames continue to inch closer to the top 25 receiving 85 votes this week.