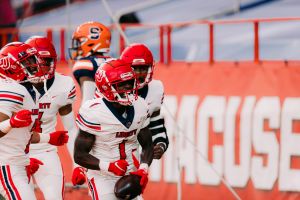 For the first time in program history, the Liberty Flames took on an ACC opponent and came out on top with a convincing 38-21 win over Syracuse University at the Carrier Dome. The win also moved Liberty to 5-0 for the first time since 2008.

“I’ve said ever since I was hired here, I like doing things that are first.” said Head Coach Hugh Freeze, “I like it for our program, for our kids, our administration, and our fans.”

Sophomore Running Back Shedro Louis was the one who carried the torch for the Flames offense rushing for 170 yards on just 10 carries and two touchdowns of 75 and 52 yards respectively. Louis was forced into bigger action as starting running back Joshua Mack was out with an illness.

“Next man up,” Louis said, “I played my part when the team needed me.”

“We just challenged that O-line and those two backs, and boy did they answer in a big way.” said Coach Freeze, “I’m really proud.”

The offensive line still is a continuous source of praise for the undefeated Liberty Flames. Aside from opening up holes for the exploding running game, the offensive line only allowed two QB sacks and zero QB hurries.

“I think the game is won up front at any level.” said Coach Freeze, “If you can control the line of scrimmage with your offensive and defensive line and your quarterback can play decent and take care of the ball, you’ve got a chance to win a lot of football games you’re in.”

Malik Willis also had a quietly productive day throwing the football going 16/20 for 182 yards and a touchdown.  Willis continues to gel with his offense more and more as time goes on, despite some injuries holding a few guys out.

“Everybody on this roster can roll,” Willis said, “We have trust in them.”

The defense also continued its’ hot streak after a shaky first quarter giving up fourteen points. Liberty has now given up an average of 11.7 points over their last three outings. Junior Safety Javon Scruggs led the way with 12 tackles.

“Outside of the early on plays and that drive (in the fourth quarter),” said Coach Freeze, “I thought our kids responded well to doing what we needed to do to win defensively.”

The Flames will return home next Saturday to host Southern Miss at 1:00 PM on ESPN3. Southern Miss had their game postponed this week due to positive COVID tests amongst their roster. A win would make Liberty 6-0 for the first time since 2008.