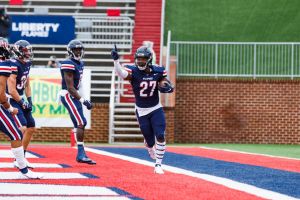 Liberty football fans can celebrate as the Flames move to 4-0 heading into Syracuse. Overall, it was a blowout as Liberty won 40-7 with another stellar defensive effort. There is a lot of good, moving parts to the whole team right now.

“Last week, we didn’t pass the test.” Head Coach Hugh Freeze stated, “[This week] They sure passed the test. Give credit to Coach [Scott] Symons, Coach [Corey] Batoon, Coach [Rickey] Hunley, Coach [Josh] Aldridge, all those guys. They worked hard to have a good plan.”

For the teams hard work, they got 8 points in the AP Top 25 poll which is the first time in school history. Junior QB Malik Willis looked good after a game off making sure he was healthy throwing 11-29 for 177 yards with one interception. He also used his legs with thirteen carriers, running 87 yards, and had one touchdown.

“We’re thrilled to be 4-0. Malik to me played like he had been out a lot.” Coach Freeze said, “He played rusty and was not crisp. Even the throws he made that were the right reads were a little off, a little behind people, a little high.”

Special teams were the biggest standout stars as they score 27 of the Flames 40 points. The special teams gave the Flames a lot of momentum with multiple young stars stepping up.

“I think the special teams and our defense were as good as I’ve been around on a given day.” Coach Freeze said, “Give them great credit, to the coaching staff, to the kids for the way they prepared for a team that looked impressive last week throwing the ball around.

The Flames will be away at Syracuse next Saturday at 12 PM on the ACC Network. Liberty look for a fifth straight win and a bounce back game from the 24-0 loss to the Orange last year.