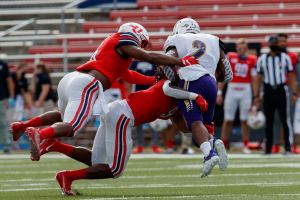 The Liberty Flames defeated the UNA Lions in convincing fashion on Saturday by the score of 28-7. The win moved Liberty to 3-0 on the season as they continued their hot start.

“Feeling great!” said Senior running back Joshua Mack, “I don’t think I’ve ever started 3-0 in my life besides high school, to start 3-0 at the highest division there is in college football and during the time we are in right now, it’s big, we just got to keep riding his momentum into next week and keep trucking!”

Liberty did not start off well however, as their offense stumbled out of the gate. The game was a very close 7-0 at halftime before the offense got going in the second half.

“The first half did not reach the expectation of us being mentally ready to play this game,” said head Coach Hugh Freeze, “but like we always say a game is not 30 minutes or is it 15, it’s 60 minutes and we got 30 minutes to change the way we approach the game.”

The defense, however, got the job done in the first half, and made up for any of the offense’s woes. Senior Linebacker Anthony Butler had two interceptions and 1 big sack at the end of the first half. The Flames had a shutout until late in the 4th quarter, but regardless took a 28-7 victory.

“I guess you speak things into existence”. He also said. “I didn’t really sense any pressure, you want to be in those types of situations to know if you are relied on that your defense will pick you up.”

A lot of players stepped up for the team on offense. With Junior QB Malik Willis’ left shoulder injured, it was Senior QB Chris Ferguson who got his first start at Liberty since being a productive QB at Maine from 2017-2019.

Ferguson spent this game shaking off the cobwebs from his injury last year. For the most part he had a clean slate with going 12/21 with 0 interceptions and 3 TDs to wide receivers Demario Douglas (Freshman), DJ Stubbs (Senior), and Brady Brumm (Junior)

“I thought he did some good things,” said Coach Freeze, “but was inconsistent.”

Another upside for a Liberty was a great running game from Joshua Mack. Mack ran for 130 yards on 16 attempts. He is the first Liberty running back since 2017 to rush for 100+ yards, 3 weeks in a row.

“We just have to Keep fighting and keep scratching and clawing,” Mack said, “And I think once you get comfortable with being uncomfortable, you just sit back and play, you do not really worry about the scoreboard or what is going on around you.”

The Flames will continue their three game homestand next Saturday at 12 PM against the Louisiana Monroe Warhawks. The game can be seen on ESPNU.