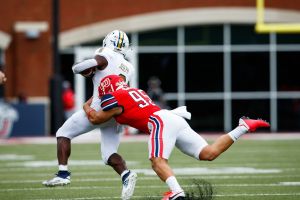 The Liberty Flames welcomed fans back to Williams Stadium on Saturday afternoon, and treated them to a 36-34 nail-biting win over the FIU Panthers. Even though the scoreboard showed that the Flames had moved to 2-0, it was clear that there is a lot of work to do for this Flames team.

“I think there are a lot of things that obviously I’m not really pleased with,” said Head Coach Hugh Freeze, “but our kids found a way to win a game at home on national TV against a very athletic, a very good, well-coached FIU team.”

Malik Willis dazzled once again. It was his arm that was the star of the show this week as he threw an impressive 24/30 for 285 yards and two touchdowns. Willis was taken out of the game in the 4th quarter, however, because of an unknown injury.

“Overall, I thought he threw it pretty well.” said Freeze, “That’ll give us more confidence in calling the game watching him do that.”

The highlight of the offensive side of the ball came from Wide Receiver DJ Stubbs (Who himself had eight receptions for 119 yards). An acrobatic one-handed catch in the back of the end zone during the third quarter to put the Flames up 24-14.

“That was one of the most exciting plays of my life,” Stubbs said, “I felt like AGG (Antonio Gandy-Golden) for a moment.”

However, despite the highlights, the offense left something to be desired in the red zone. Liberty made eight trips to the red zone with only three ending in touchdowns. The other five were three short field goals (27, 21, and 27), a missed 36-yard field goal, and a kneel at the end of the game.

The defense had its’ struggles on the day as well. D’Vonte Price had 148 yards on the ground for FIU to go along with two touchdowns plus one receiving, while FIU ‘s third quarterback of the day, Stone Norton, threw 9/13 in the second half for 120 yards and two touchdowns.

The defense was able to rise to the occasion when it mattered, however. In the fourth quarter a crucial stop on a 2 point-conversion attempt preserved the lead before a 4th down stand to seal it.

The man who brought Stone Norton down to seal the deal was Senior Defensive End Jayod Sanders. That sack on Norton to end the game was his only tackle, but it was the most important tackle in the game.

“I’m certainly happy for Jayod to come up big in that moment. He’s a great kid.” Freeze said, “Obviously, he has worked hard to get himself in the rotation at times.”

“I made up my mind that I had to make this play and end the game.” Sanders said, “It turns out I did, so I just want to thank God for that opportunity.”

The Flames continue their three game homestand next Saturday at 1 PM against the University of North Alabama. The game can be seen on ESPN3.