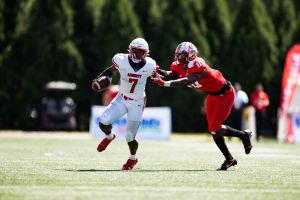 The Liberty Flames got their season underway on Saturday in Bowling Green, Kentucky with a 30-24 victory over the Western Kentucky Hilltoppers. Junior Quarterback Malik Willis stole the show rushing for 168 yards (a Liberty quarterback record) and three of Liberty’s four touchdowns. This went along with an efficient day throwing the ball going 13 for 21 for 133 yards.

“Knowing the game plan we had put together and how hard these guys have been working,” Willis said, “it seemed like I had nothing to be nervous about.”

Willis was a part of a potent Liberty rushing offense which gained 354 yards on 58 attempts and all four of Liberty’s touchdowns. Joshua Mack added a 100-yard performance on 23 carries (his fourth 100-yard game as a Flame), while Shedro Louis ran for a 29-yard touchdown towards the end of the third quarter.

“I’ve said the few times I’ve interviewed in fall camp,” Head Coach Hugh Freeze said, “that I felt good about our O-Line and our running backs.”

The offensive line did not just succeed at blocking for the running game. They also allowed only one quarterback sack and one hurry of Malik Willis.

“The O-line had a great game.” Willis said, “They were making it really easy for me.”

Liberty’s defense also held the Hilltoppers to 291 yards of total offense and less than 100 rushing yards. The Flames also stepped up when it counted the most holding Western Kentucky to only three out of ten on third downs. However, the Flames defense was not entirely satisfied with their performance.

“I feel like we left some plays out on the field,” Junior Safety Javon Scruggs said, “but at the end of the day we got the win.”

While Liberty did lead the ballgame most of the way, the game appeared to be slipping away from them in the third quarter. Liberty had given up fourteen unanswered points and had a failed fourth down conversion in the red zone with 5:30 to go in the third. However, the Flames regrouped forcing a Hilltopper punt, and scoring on the next drive giving Liberty the lead for good.

“Hopefully the poise that our kids show is a result of great leadership in the locker room along with how we prepare.” Coach Freeze said, “I was really pleased to see us take back control of the game.”

The Flames next game will be their home opener, which is set to take place on September 26th at 1:00 PM against Florida International. The game can be seen on ESPN3.