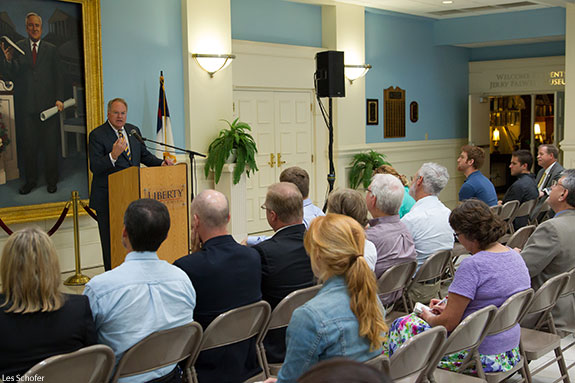 Bill Hazel, Virginia secretary of Health and Human Resources, spoke on the future of health care during a visit to Liberty University. He was joined by Del. Scott Garrett of Lynchburg (front row, far right). 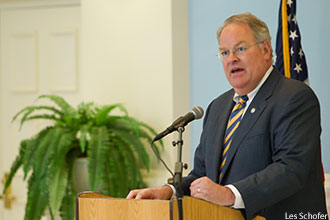 Virginia Secretary of Health and Human Resources Bill Hazel spoke to Liberty University faculty, staff, and students in the Grand Lobby of Arthur S. DeMoss Learning Center on Wednesday about the future of health care in Virginia.

He was joined by Del. Scott Garrett of Lynchburg in an event coordinated by Liberty’s School of Health Sciences.

Hazel, who received a civil engineering degree at Princeton before going to Duke to become an orthopedic surgeon, has been charged by Gov. Bob McDonnell to prepare Virginia for health system reform mandated by President Barack Obama’s controversial Patient Protection and Affordable Care Act. Also known as ObamaCare, it was signed into law on March 23, 2010, soon after McDonnell and Hazel took office.

Liberty University filed the first private lawsuit against ObamaCare charging that the health care bill is unconstitutional on the grounds that it forces every employer to provide federally mandated insurance — which includes funding of abortion-inducing drugs.

On Wednesday, Hazel, too, expressed objections to the mandates specified in the bill.

“My own personal belief, and let me add the disclaimer you see on TV, ‘The opinions expressed here are not necessarily those of the management,’ I think that individuals should be responsible for purchasing their own health insurance,” he said. “I think that to the extent that taxpayers are supporting coverage, they should support individuals and not employers.”

Garrett, who formerly served as chief of surgery for Lynchburg General Hospital and Virginia Baptist Hospital, said those are a few of the enormous hurdles legislatures now face in providing responsible and fair health care coverage throughout Virginia and the United States.

“It’s not a republican or democrat (issue), it’s not a black-white, rich-poor, young-old, men or women (issue), it’s a people thing,” Garrett said. “We’ve got huge challenges. If funding ObamaCare, or the Affordable Health Care Act, is the 800-pound gorilla in the room, trying to provide the care is the 1,000-pound gorilla. There’s not enough physicians and nurses and physical therapists and so forth in the Commonwealth of Virginia today to provide that care.”

Monitoring and maintaining a standard of quality health care across the state and the nation will be another major difficulty, Garrett said.

“Clearly in my mind, the 2,000-pound gorilla in the room is peoples’ expectations and peoples’ perceptions, because we, as Americans still expect absolutely the best of everything,” he added.

As Virginia’s Secretary of Health and Human Resources, Hazel oversees 12 state agencies with about 15,000 employees, including such diverse programs as Medicaid, Behavioral Health, Social Services, and Aging and Disability Services. These combined agencies spend approximately one-third of Virginia’s budget.

Hazel said the United States spends more than any civilized country —18 percent of its gross domestic product, or roughly $2.8 trillion annually — on health care. Switzerland, at 11.5 percent of its GDP, ranks second in the world, and it provides health care coverage to everyone.

“Our whole U.S. defense budget is 3.5 percent of our gross domestic product, so we in health care are spending twice our U.S. defense budget in excess of what Switzerland does, and they’re getting everybody covered,” Hazel said. “How do we justify that? I think this is the ultimate challenge we have to address. Not only do we have to look at the fact that we are using those resources, but what are we getting for those resources? Are we getting a healthier population? No, we’re not. There is really no measure that suggests we are providing in this country the value for that extra money.”

Prior to addressing the crowd, Hazel congratulated Liberty for launching its College of Osteopathic Medicine, which will matriculate its first class of students next fall, preparing to meet the nation’s future health care challenges.