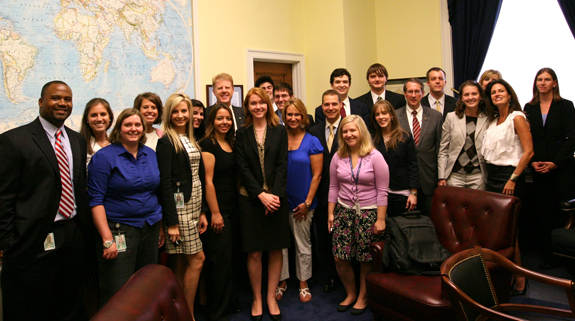 Jonathan Falwell and his wife, Shari, pose with Rep. Bob Goodlatte (R-6th District) and Liberty University students and alumni who are serving as interns or full-time staffers on Capitol Hill.

The Rev. Jonathan Falwell, Vice Chancellor for Spiritual Affairs at Liberty University and senior pastor of Thomas Road Baptist Church, said the opening prayer at the U.S. House of Representatives yesterday, July 29. He was welcomed as the guest chaplain by Rep. Bob Goodlatte, R-6th District.

"It was such an honor," Falwell said. "I spent a great deal of time praying about the words I would use in my congressional prayer because, above all else, I wanted Christ to be magnified in that place. I prayed that God would direct the steps of the men and women who serve in Congress. I also focused on the admonition from Scripture that 'righteousness exalts a nation but sin is a reproach to any people' and asked forgiveness for our sins as a nation."

After the prayer (see full text below) and Pledge of Allegiance, Goodlatte introduced Falwell as the senior pastor of TRBC, "one of the largest churches in America which has a tremendous outreach to the community in Lynchburg, across Virginia, across the nation and indeed across the world, helping people in need." He announced Falwell's role at Liberty University, "the world's largest evangelical Christian university with over 40,000 students both on campus and online." Goodlatte said he was honored to call Falwell "a constituent and, most importantly, a dear friend."

He welcomed Falwell's wife, Shari, their four children and his mother, Macel Falwell.

"We are delighted they could be with us to share in a full day of activities here at the United States' capital and to meet as many members of the House and staff members and others who work so hard here on behalf of our country," Goodlatte said.

Falwell said Goodlatte took them on a "behind the scenes" tour of the Capitol, including climbing to the top of the Capitol dome.

"We were able to look out over Washington from atop the dome which offered a breathtaking view. We also were able to travel down Pennsylvania Avenue and spend some time touring the White House which was a great thrill for my children," he said.

Falwell and his family also visited with several lawmakers, discussing the importance of God in our society.

"I am greatly encouraged to hear of the work that is being done by a number of congressmen to make prayer a focus in D.C.," Falwell said. "They shared incredible stories of how God is moving in the lives of many of those who represent us in Washington. It helped me to remember to pray not only for the legislation that guides our nation, but for the men and women who lead us as well."

In the afternoon, they visited with about 25 Liberty students and alumni who are either serving as interns or full-time staffers on Capitol Hill.

"I was greatly encouraged to hear from these young men and women about how God is using them as 'Young Champions for Christ' in our nation's capital," he said.

"Our Heavenly Father, we thank you for our great nation. We thank you for what you have done to make this nation a lighthouse to the world and a beacon of hope to people everywhere. We know as our forefathers knew and as the Scriptures tell us that righteousness exalts a nation but sin is a reproach to any people, and so today we ask your forgiveness for the sins that we as a people and we as a nation have committed. Today we seek your wisdom and your guidance in all that takes place in this room. We ask you to be a lamp unto our feet and a light unto our path. We ask you to protect the men and women who serve here in this place. We ask you to protect the men and women who serve our nation around the world today and are in harm's way. We ask you to lead them as they lead us. And above all we ask you to continue to bless this great land that we call home. In Jesus' name we pray, Amen."

Read a feature on Jonathan Falwell in the June/July 2009 Liberty Journal.