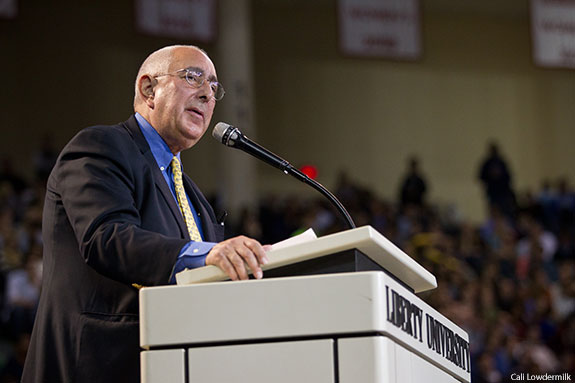 Though this was his first time speaking to a Convocation crowd, Stein has visited Liberty several times in the past few years, including in May 2009 when he delivered the Commencement address and February 2010 when he held a Q-and-A with a group of students at Liberty Mountain Snowflex Centre.

Stein is a personal friend of Chancellor Jerry Falwell, Jr. and his wife, Becki.

During his visit, Stein said several times he loves being at Liberty: “(The students) here are well-disciplined, respectful, and it’s a school explicitly founded on belief in God.”

Stein is a prominent economist, columnist, and lawyer, but is also well known for his acting as the monotone professor in “Ferris Beuller’s Day Off” and the the spokesperson for Clear Eyes. Falwell even showed a short clip from the movie, provoking much laughter from the students.

In light of the upcoming presidential election, Stein compared the challenges facing the current administration to the world into which he was born in 1944.

Stein also drew on his background as a political speechwriter to discuss various moral issues facing America. He expounded on six moral issues that he sees as problems facing the nation: the national debt, a declining work ethic, pornography, the collapse of the family system, the decline in the quality of education, and abortion.

The solution to these issues is “fairly simple,” he said, “behaving decently toward our fellow human beings as God commands us to do.”

“It all comes down to doing a certain kind of work — work to make a better world and work to be better friends, neighbors, family members, and children. And to follow God’s Word and honor God and love one another.”