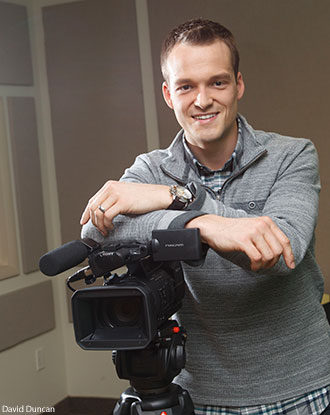 Brian Bosché, a student at Liberty University School of Law, recently accepted an offer with Glenn Beck’s TheBlaze TV to be a face of the new “For the Record,” what Beck hopes to be an edgy news program aimed at younger viewers.

Upon completion of his law degree in May, Bosché will begin with TheBlaze as a reporter in June.

“It is an amazing opportunity for a Liberty law student to land such a strategically influential job as a media reporter and correspondent for a national newscast with Glenn Beck’s network,” said Mat Staver, dean of Liberty’s law school. “Immediately upon graduation Brian Bosché will be influencing the country through investigative and documentary news stories. I could not be more proud of Brian.”

Bosché, a native of nearby Roanoke, Va., will become the first Liberty law graduate to work in a major television broadcasting position. He is also a rarity among law students, as he attended Liberty in hopes of pursuing journalism rather than practicing law.

Bosché said he is passionate about politics and the Constitution and decided to pursue a law degree at Liberty to add another skillset to his arsenal. A law degree, he said, is “a great tool” when interviewing politicians and other individuals with legal training.

He called his experience at Liberty “incredible.”

“I went to Liberty — and applied only to Liberty— because of the worldview aspect,” Bosché said. “I wanted to come here because I wanted my legal education to be in line with my Christian worldview. They have a different method of teaching here at the law school. It’s a very foundational approach and it’s constitutionally based.”

The opportunity with TheBlaze came as a surprise to Bosché, who studied broadcasting at Virginia Tech before coming to Liberty to study law. In early December 2012 a former producer of Bosché’s, who now works for TheBlaze, reached out to him. The producer remembered Bosché’s work out of more than 200 other undergraduate students he had worked with while producing a national news website targeted to college students.

He set up a preliminary interview with Bosché at TheBlaze TV’s Columbus, Ohio, offices soon after and at the end of January, the network flew him to New York for an interview with Joel Cheatwood, TheBlaze’s president and chief creative officer. Bosché was offered the position 24 hours later.

“It is all very humbling … the fact that I was even (considered),” Bosché said. “It’s humbling to come right out of law school and go do something that has widespread potential to be a successful television network.”

Bosché said this is a dream job for him; he has wanted to be a television journalist since high school, when he did morning announcements and worked with a local news station to sharpen his skills. In college he did whatever he could to gain experience, including online broadcasting, interning locally and at the NBC News Washington Bureau.

Beck recently announced plans to expand TheBlaze into “a cutting-edge international news network.” He plans to use programs, such as “For the Record,” to re-establish hard-nosed, investigative journalism, which he feels is no longer the standard in television news.

“‘For the Record’ will offer the hardline journalism we don’t see much of anymore,” Bosché said. “We don’t get much depth anymore with television news … I think that we are missing out on that informed citizenry we really need when we are talking about voting and decisions for our country.”

TheBlaze began as a 24-hour online news and entertainment network, and last fall it was launched on DISH Network, Channel 212. Beck has high aspirations for the network and hopes to see it continue to expand, in spite of its critics, and become competitive with other major news networks.

Beck has a good relationship with Liberty because of his no-nonsense approach to defending traditional, conservative values. He was the keynote speaker at Liberty’s 2010 Commencement. Chancellor Jerry Falwell, Jr. has appeared on Beck’s television show to discuss topics such as social justice and the role of religion in today’s society.